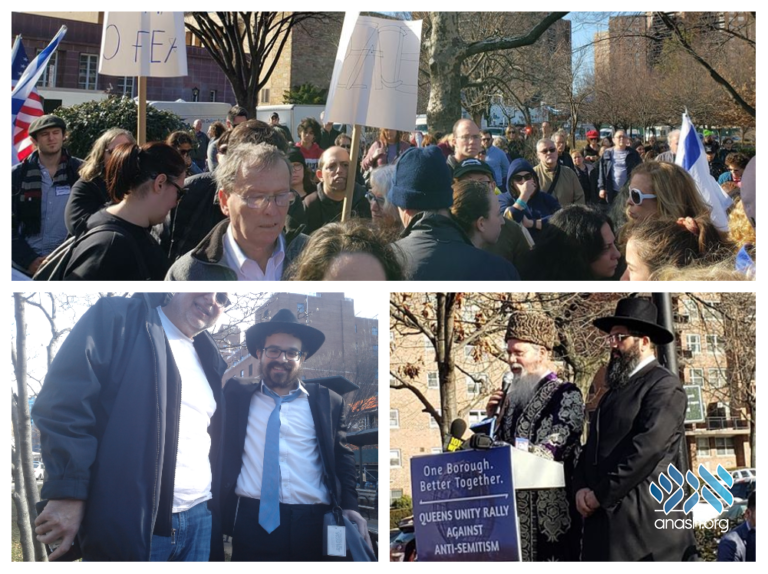 At a rally against antisemitism in Queens this week, shluchim  Rabbis Mordechai and Mendy Hecht, themselves victims of antisemitic attacks, used the opportunity to encourage mivtzah performance.

A Queens Unity Rally against anti-Semitism took place on Sunday at Mcdonald Park in Forest Hills, NY in response to the uptick of attacks on Jews and Jewish communities.

In Queens itself, a number of attacks took place. On Rosh Hashana night a member of Chabad of Forest Hills North was hit with a bottle and told to “go back to where he came from”. The Rabbi himself was also subject to antisemitism on more than one occasion. On Chanukah, he was verbally attacked due to the Menorah on his car and on another occasion he had slurs directed out him right outside the Chabad house.

Chabad of Forest Hills/North under the direction of Rabbis Mordechai & Mendy Hecht participated in the march to show solidarity by spreading more light to push away the darkness.

The shluchim gave the men the opportunity to put on tefillin, while the women were given beautiful custom-made candle lighting magnets and Friday Light packets that consist of an explanation on the mitzvah with a bracelet and candle kit to do the mitzvah of lighting Shabbos candles weekly.

“It was a beautiful success and a big Kiddush Hashem!” Rabbi Mordechai Hecht says.