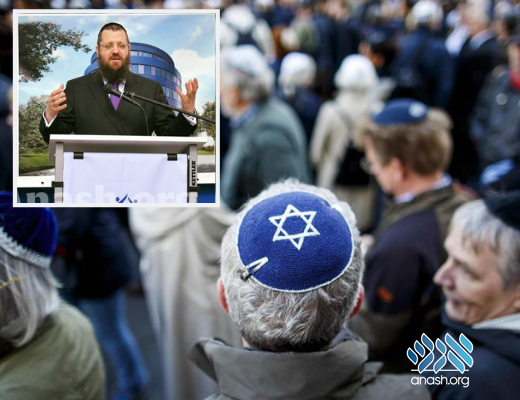 After a German government official advised Jews not to wear a kippa “everywhere, all the time,” shliach Rabbi Yehuda Teichtel called on locals to continue wearing it with pride.

Germany’s anti-Semitism commisioner Felix Klein was quoted Saturday as saying: “I cannot recommend to Jews that they wear the skullcap at all times, everywhere in Germany.” He did not elaborate on which places and times might be considered risky.

“The statement of the German government’s anti-Semitism commissioner that it would be preferable for Jews not wear a kippa in Germany out of fear for their safety, shocked me deeply,” Israeli President Reuven Rivlin said in a statement.

He went on to declare, “We will never submit, will never lower our gaze and will never react to anti-Semitism with defeatism — and expect and demand our allies act in the same way.”

Meanwhile, the US Ambassador to Germany took to social media to urge Jews to do just the opposite. “Wear your kippa. Wear your friend’s kippa. Borrow a kippa and wear it for our Jewish neighbors,” Richard Grenell wrote on Twitter.

In a similar statement, Shliach Rabbi Yehuda Teichtel called on Jews to continue wearing their yarmulkas with pride. “The combating of anti-Semitism is a top priority, so it is appreciated that this is being addressed by top representatives of the government,” Rabbi Teichtel wrote on Facebook.

“At the same time, the KIPA is a clear symbol of Jewish identity and should be worn with PRIDE.”

Government statistics released earlier this month showed that the number of anti-Semitic and anti-foreigner incidents rose in Germany last year, despite an overall drop in politically motivated crimes.