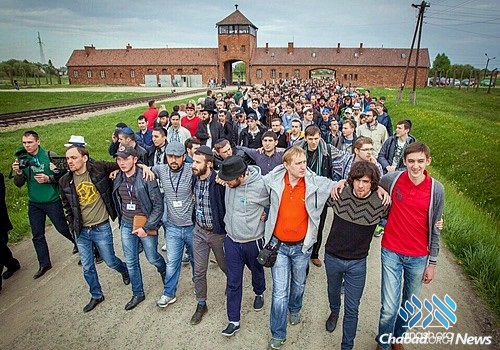 Just weeks after the anti-Semitic attack at Chabad of Poway in Southern California that took the life of a congregant and wounded three others, the synagogue’s rabbi, himself permanently injured in the shooting with the loss of a finger, will visit the Auschwitz concentration camp in Poland.

There, he will proclaim a message of Jewish pride and resilience to a group of 800 Jewish young people from the Commonwealth of Independent States on their annual “Eurostars” trip to sites of Jewish interest and history across Europe.

Organized by the Yahad special programs platform headed by Rabbi Mendy Wilansky, under the umbrella of the Federation of Jewish Communities of the CIS, Eurostars rewards young Jews who have made a significant commitment to Jewish study with a trip to several European countries, where they visit local tourist destinations and places of import.

This year, the group’s itinerary included a visit to Rome, where they held a Torah reading in the Colosseum, met with Italian Prime Minister Giuseppe Conte and explored the history of the 2,000-year-old Roman Jewish community along with some of the Chabad-Lubavitch rabbis who lead it today, as well as Italian-born Chief Rabbi of Russia Rabbi Berel Lazar.

On Sunday, they will tour Auschwitz, where more than a million Jews and others were murdered by the Nazis during the Holocaust. The message they hear will not be one of mourning, but one of resilience, rebirth, and triumph in the face of adversity.

Goldstein will speak from personal experience as he recounts the horrifying moments when he stood face-to-face with evil. His finger shot off, Goldstein got up on a chair and told his congregation, “Am Yisrael Chai! Nothing will take us down! This is what the Rebbe taught us, this is what we live with. We are going to stand tall, we are going to stand proud of who we are, of our heritage … and we’re going to get through this.”