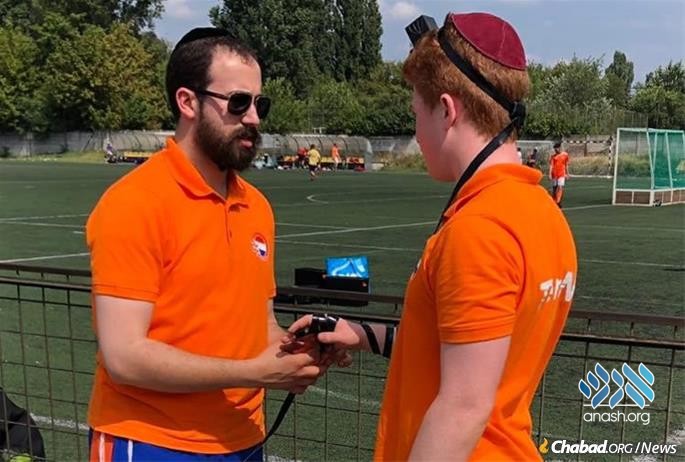 Chabad educators like to turn their students into leaders and influencers in their own right as quickly as possible. So upon leaving this year’s European Maccabi Games in Budapest, where he had journeyed last week to support his country’s team, Rabbi Yanki Jacobs knew that he had made some headway when a group of participating athletes pledged to continue his work after he was gone, including wrapping tefillin with other Maccabi delegations.

Jacobs, who co-directs Chabad on Campus in the Netherlands, departed after spending four days alongside the 105-member Dutch delegation in a role that perhaps had never been played before: that of “spiritual coach” to a Maccabi sports team.

“It’s very humbling that they trusted me to join them on the trip as a part of their team,” Jacobs told Chabad.org back in place at the Chabad center in Amsterdam. “It is not an obvious practice that a sports delegation would bring a rabbi with them. The fact that they did showed a tremendous amount of determination and trust.”

The 30-year-old rabbi had come to be involved this year after accepting an impromptu invitation by members of the Dutch delegation to join them during the games held four years ago in Berlin. Team members who had been texting him pictures throughout the historic German-hosted 2015 games sought his actual presence for moral support and to help them celebrate Shabbat in a more meaningful way, he said.

Members of the group kept in touch with him over the past four years, and in planning their trip to this year’s games, held in Budapest from July 29 to Aug. 7, they invited Jacobs to join them again for as long as he could. He eagerly accepted, beginning the program this year with a pre-trip Shabbat gathering in Amsterdam for the Dutch sports teams and staff.

Kicking Things Off With Some Judaism

“They liked the idea of kicking things off with a Jewish event, even though many of them had not celebrated Shabbat before,” said Jacobs, who with his wife, Esty, cater mostly to university students as part of their Chabad on Campus program, as well as a mix of young professionals, athletes and others. “I was able to connect for them their involvement in a Jewish cultural event with another aspect of their Jewish identity, Friday-night services, a Shabbat meal and the blessings made after the meal, making the point that Maccabi is about a healthy and able body, and Judaism about a healthy mind and soul.”

This year, 2,300 athletes from 42 countries, including teams from Israel, are participating in the games in the Hungarian capital, in some cases on soil fraught with dark times in Jewish history. Among the poignant moments so far was a Shabbat celebration last week attended by some 6,000 Jews from throughout Europe and Israel, and an evening prayer service initiated by the French delegation as a prelude to all the teams’ grand entrance into the stadium during opening ceremonies.

“The neshamah [‘soul’] wants to express itself, so I urged my delegation to join in the service, and it was a great experience,” said David Beesemer, chairman of Maccabi Holland and an enthusiastic supporter of Jacobs’s participation. “Jewish identity and pride is very important to Maccabi Holland, and the presence of Yanki, who is loved and respected by our athletes and supporters, provided the exact extra ingredient that we find very important.”

Jacobs said he spent time as a supportive spectator, viewing the matches in between tefillin-wrapping and Jewish conversations, deepening connection with athletes from his home country and engaging with others from France, Argentina, Gibraltar, Germany, the United States and other countries.

For his part, Jacobs said he spent much time as a supportive spectator, viewing the matches in between tefillin-wrapping and Jewish conversations, deepening the connection with athletes from his home country and engaging with others from France, Argentina, Gibraltar, Germany, the United States and other countries. During his stay, he traded in the usual black and white rabbinic dress for the Dutch delegation’s bright-orange sports uniform—the country’s royal color—in a further show of unity and support.

By blending in, “many people approached me that would not have back in Holland or other places,” he said. “Most special was a 41-year-old who donned tefillin for the first time in his life. Although in Amsterdam we live only a few hundred meters apart, we had to both come to Budapest to meet, connect and celebrate this important moment together.”

But the crowning moment of his trip was when, upon the eve of his departure, athletes from Gibraltar, newly initiated in the Chabad practice of helping others wrap tefillin, having observed Jacobs’s activities during the week, came to him and said: “You are leaving tomorrow, but we are going to take a pair of tefillin and use it to put it on others.”