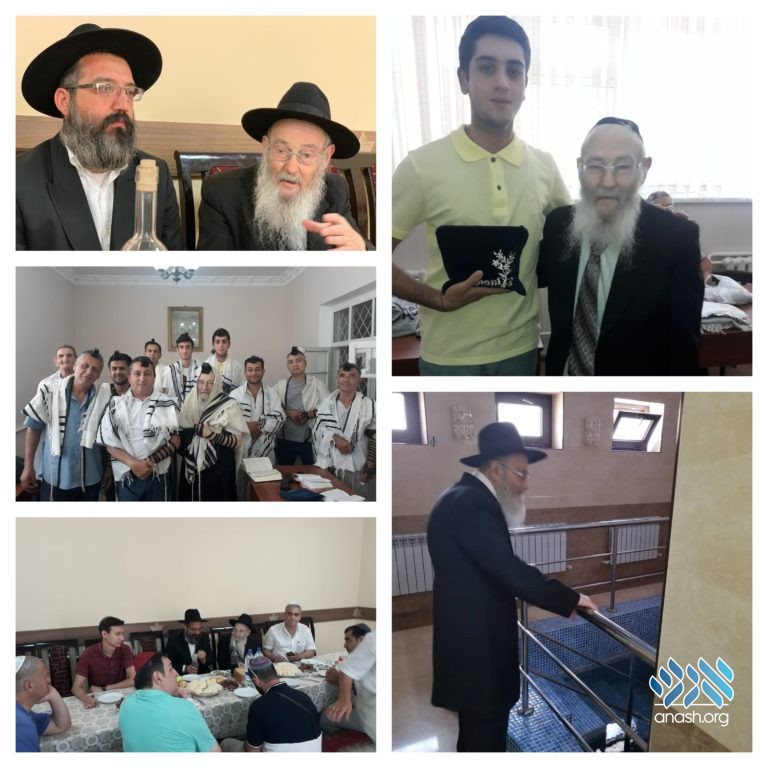 The Jewish community in Tashkent, Uzbekistan recently had the privilege of hosting one of its veteran shluchim, with the visit of Rabbi Abba Dovid Gurevitch to the city yesterday. He was accompanied by his grandson, Rabbi Yisroel Ganzburg, who had been working in Tashkent over the last several years, replacing his zeide.

Rabbi Gurevitch had been expelled from the country by the regime some 11 years ago, after years of working with the Rebbe’s brochos to revitalize Judaism after the fall of the Communist regime. He recently received a special entry visa and was thus able to return for a short visit.

Many of this old talmidim in the Chabad School were overjoyed to see their old teacher and mentor and pledged to take part in the events that were organized in Rabbi Gurevitch’s honor.

The official visit commenced with a Yud-Beis Tammuz shachris at the Bukharian Grabanova Shul, where shliach Rabbi Boruch Abramtchayev is the rov. After davening an exciting farbrengen took place, where participants shared activities going on currently in Tashkent. Rabbi Gurevitch told the story of Yud Beis Tammuz and the great mesiras nefesh that the Rebbe and Chassidim had under the Soviet regime. So too must we all continue the tradition of spreading Yiddishkeit, even when times no longer demand mesiras nefesh like they did then.

Rabbi Gurevitch’s next stop was the mikveh that was built some 28 years ago, at the beginning of his shlichus. When he was forced to leave he made sure not to sell his house, so that the mikvah could continue to function there. He later donated the property so that a big, beautiful and modern mikvah could be built there. It was ultimately built by noted philanthropist Lev Leviev in honor of his wife.

From Tashkent Rabbi Gurevitch flew to Feraghana, in the Eastern part of the country, where he met local Jews and gifted them with Talleisim and Tefillin, not before explaining to them how important it was to put them on very day. The days that he spent in Uzbekistan were utilized to encourage the kehillah members, to encourage them to go to shul daily, to learn Torah, and to educate their children with the beauty of Yiddishkeit.

The finances for the trip, as well as for the religious articles were provided by the Englender family. Their ancestors were refugees in Uzbekistan during WWII, so they have a strong connection to the Jews of that country. Some of their family members were buried there and they wished that a minyan go to the kever of the family patriarch and say kaddish on the day of the yohrtzeit.

Time will tell if Rabbi Gurevitch will be able to make more trips to Uzbekistan.