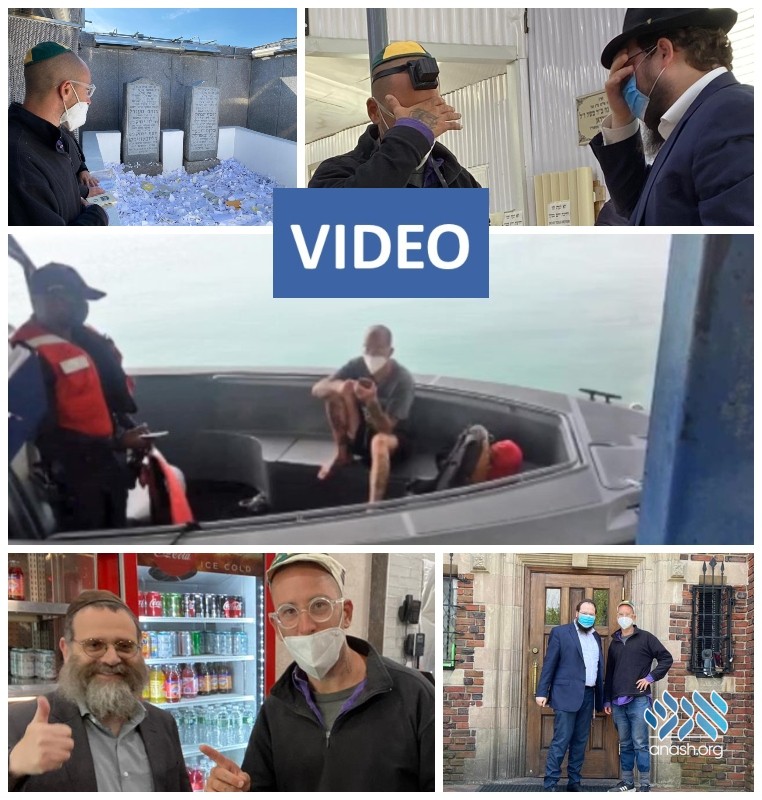 After being stuck on a 12 meter boat off the coast of Jamaica for over a month, Israeli backpacker Amit Mendel finally made it home to Israel thanks to the Jamaica Shliach Rabbi Yaakov Raskin.

After being stuck on a 12 meter boat off the coast of Jamaica for over a month, Israeli backpacker Amit Mendel finally made it home to Israel thanks to the Jamaica Shliach Rabbi Yaakov Raskin.

The saga began over five months ago, when Amit hitched a ride on a boat to South America, with the intention of arriving in Mexico. In the spirit of true explorers, he went from boat to boat, trying to get to his destination with minimum expenses.

Eventually arriving at Mexican shores, he was refused entry due to the coronavirus, which had already begun to spread worldwide and cause countries to close their borders. Unable to travel to America without a visa, Amit and his host, a non-Jewish Italian man, decided to try to get to Jamaica, where they would disembark and figure out their next step.

But when they arrived in Jamaica, an unpleasant surprise was awaiting them. The country had sealed its borders and refused to even let them step off the boat. Thus began a weeks-long wrangling between the Israeli government, the Jamaican and high profile activists around the world.

“As soon as I heard of Amit’s plight, I set out to do whatever I could to help,” Jamaica Shliach Rabbi Yaakov Raskin told Anash.org. “At the beginning it seemed that the Jamaican Government would let him him after a short while, so I arranged for food and supplies to be brought to the ship while they waited.”

Rabbi Raskin arranged for Matzah and Pesach supplies to be brought to the ship for Pesach, and kept in touch with Amit and his parents who were watching the scene unfold from Israel.

“We quickly realized that Jamaica did not have any plans to let them off the boat, so whoever was able to help got involved,” Rabbi Raskin said.

With no Israeli embassy in Jamaica, the embassy in the Dominican Republic started looking for solutions. Weeks passed with no clear solution in sight. The Israeli honorary consul to Jamaica Mr. Ainsley Henriques, Israel consul to Jamaica from Dominican Republic Mr. Danny Brian and Israeli businessman Mr Shalom Hadorah, each spent hours upon hours working with whoever they could. During the entire time, Rabbi Raskin kept in touch with both the embassy and with Amit.

Realizing that Amit was reaching the brink of despair, Rabbi Raskin wrote a letter to the Rebbe describing the situation. Immediately afterwards, he got in touch with a powerful Jewish lobbyist in Jamaica and asked him to help. Within a few hours, Amit received permission to disembark and fly to America.

Once in America, Amit told Rabbi Raskin, who is also in New York at the time, that he wanted to meet up with him to thank him for his efforts. Telling him that his thanks should go to the Rebbe, Rabbi Raskin made up to meet him by the Ohel. There, they emotionally thanked the Rebbe for his brachos. With the encouragement of Rabbi Raskin, Amit pledged to start putting on tefillin.

After the Ohel, the pair headed to Crown Heights for lunch and to purchase a pair of Tefillin for Amit. Stopping in for a bite before going to the sofer, they met up with a renowned Crown Heights philanthropist.

“I told him the story, and he immediately said that he would like to take part in the mitzvah and pay for the tefillin,” Rabbi Raskin said.

Immediately, they headed for the sofer and purchased the tefillin, after which Rabbi Raskin dropped Amit off at his host, where he is waiting for his flight back to Israel and the happy ending to the months of uncertainty.

“Chabad and Rabbi Raskin saved my life, no question about that,” Amit said. “It was thanks to him that I am on my way home, safe and sound.”