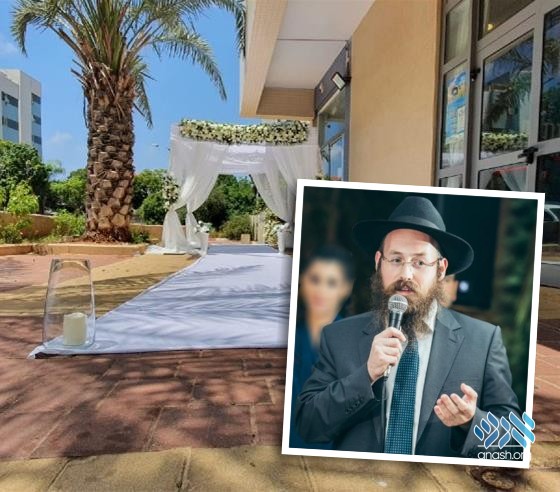 In a modest offer that went viral on Israeli media, Rabbi Shneur Simcha and Moussia Landa, shluchim on Campus in Netanya, Eretz Yisroel, offered their Chabad house to any couple that wishes to get married while following health regulations.

Rabbi Shneur Simcha and Moussia Landa have directed Chabad on Campus in Netanya, a seafront city in central Israel just North of Tel Aviv, for the last seven years. One of the rabbi’s greatest honors during that time, he says, was conducting marriage ceremonies for graduates that he and his wife had mentored at their Chabad House. But with the onset of the coronavirus pandemic, weddings came to a halt, with many couples canceling plans in the hope of celebrating with their friends and families as soon as the outbreak subsided.

But soon after Israel recovered from the initial phase of the virus last month, it became clear that the ordeal was far from over. New cases have again been rising dramatically throughout the country. Many couples wishing to marry found themselves delaying their wedding plans for a second time.

Realizing the frustration and distress this situation was causing young couples, Landa had an idea that has won nationwide praise: While meticulously following all safety measures prescribed by the Israeli government, including social distancing, mandatory face mask and limiting the number of attendees, he will be performing marriage ceremonies at his Chabad center for anyone who asks—at no charge.

Most Israelis are not affiliated with any synagogue and have no rabbi, yet are Jewishly traditional in that almost everyone wants to have a traditional Jewish wedding under a chuppah. As a result, the effects of Landa’s initiative have reached far beyond Chabad of Netanya. Eager couples from all over Israel have contacted him, inquiring whether he knew of a Chabad rabbi in their city or region that was willing to perform their wedding, with no further delay, at a local Chabad center. Many are doing so, all strictly following up-to-date guidelines.

“Rabbi [Landa] really helped us out, starting during my time here as a student,” says Aviad Peretz, 27. “When he shared his idea, we said, ‘Let’s make a modest and compact event for our families, and in the future we will have a bigger wedding celebration, maybe in a year when corona passes.’ ”

During the Three Weeks, when the Jewish nation mourns the destruction of Jerusalem and the dispersion of the Jewish people, it is customary not to hold weddings. Yet, the rabbi says he is using this time to help couples make arrangements for weddings later in the summer.

Aviad and his fiance, Or, initially planned to be married in June, but that was postponed. The ceremony will now take place after the Three Weeks, in early August, on the 15th of the Hebrew month of Av, a marriage-themed mini-holiday in Jewish tradition.

‘A Good Thing Ought Not Be Delayed’

The rabbi points out that while Jewish law has no problem with delaying a marriage, the view of the Rebbe was that “a good thing ought not to be delayed.” When asked, the Rebbe nearly always discouraged delaying a wedding.

“We have a beautiful Chabad House that can comfortably hold 20 participants for a small but elegant wedding,” Landa told Chabad.org. This is in accordance with the directive by Israeli health authorities limiting weddings and other indoor gatherings to 20 participants and outdoor events to a maximum of 30.

Landa posted his proposal, along with his personal contact details, to Facebook and WhatsApp, where it quickly went viral. He was deluged with calls from couples throughout the country weary of having to further delay their happy occasion and eager to have somewhere, anywhere, where they could tie the knot.

Landa notes that the primary difficulty for couples was getting used to the idea that they were not going to have the large and festive wedding many couples often imagine. Instead, they would have to suffice with a modest ceremony attended by close family members, and, of course, no beloved grandparents with underlying medical conditions who face an increased risk from the coronavirus.

He says he received an enormous amount of positive feedback for the initiative. Israel’s Channel 13 interviewed him, helping spread the message that even if the festive celebration must be delayed, there is no reason couples cannot get married, even in the midst of a global pandemic, so that they can immediately focus on building a strong, loving relationship and a Jewish home together. Following the positive publicity, wedding vendors eager to take part in the endeavor turned to Landa with offers of subsidized or even free services for couples, including fancy wedding canopies, live music and professional photography.

“There is no reason not to go ahead and perform a wedding focused on the essentials,” said the rabbi. “I am glad to help these young people proceed and focus on strengthening their relationship and building their home together. Later, when things improve and the restrictions are lifted, those who wish to do so can invite their friends and extended family to a great and festive wedding celebration. We’ll be delighted to join them.”