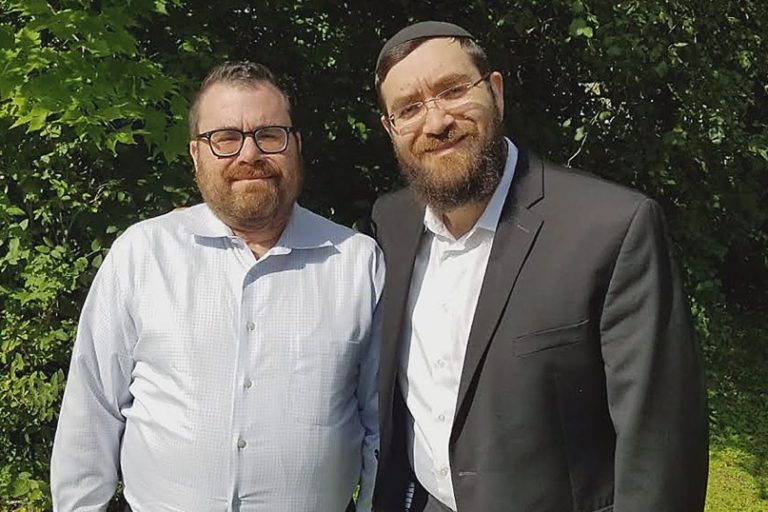 It was in 2012 while working at the Bishop’s Corner Big Y, that Rabbi Eli Ostrozynski first met Aron Gerson.

“I was working part-time as a mashgiach for the HKC [Hartford Kashrut Commission],” Ostrozynski recalls. “Aron came in and we talked. I asked him if he’s visiting and he says, ‘No, I just moved to town.’”

Ostrozynski hadn’t met Gerson before but still, he says, “he looked like someone I may have met before…he looked familiar.”

Gerson had just arrived in West Hartford and planned to begin his doctoral studies in sociology at the University of Connecticut. Ostrozynski invited Gerson to Shabbat dinner that week, but Gerson already had plans. Ostrozynski told him he was invited any time and to stay in touch.

And that was that…until a few weeks later, when Gerson took Ostrozynski up on his offer.

A Chabad rabbi who has led United Synagogues of Greater Hartford for the past eight years, Ostrozynski – or Rabbi Eli, as he is known – always has lots of guests on Shabbat at his West Hartford home.

But this Shabbat dinner was different – it turned into a veritable family reunion as Eli slowly discovered over the course of the evening that Aron was his long-lost brother.

The road to this chance encounter was full of some interesting coincidences. Rabbi Eli calls it bashert – or destiny – that the two brothers would come together.

The story began many years ago when their father, Tzvi, was a child in Uruguay.

Born in Montevideo, Tzvi Ostrozynski’s parents were not religious but they sent him to a Modern Orthodox-Zionist school.

According to Rabbi Eli, though his father didn’t grow up in the Chabad movement, “he had a Chabad rabbi in his school who educated him and influenced him to become more religious.”

At the age of 19, he says, his father came to America and enrolled in a Chabad school in Brooklyn, New York. There, he became fully religious and met his former wife.

Tzvi Ostrozynski and his first wife were married for a short time before going through a bitter divorce right after the birth of their son, Aron. The divorce left Tzvi completely estranged from his young son. He went on to marry again, settling in Crown Heights where he and his wife raised three sons, including Rabbi Eli.

Eli Ostrozynski arrived in West Hartford about a decade ago. He first taught at what was then the Bess & Paul Sigel Hebrew Academy of Greater Hartford (now part of the expanded New England Jewish Academy in West Hartford) and then at the Hebrew school of United Synagogues of Greater Hartford, before being asked to become the shul’s rabbi in 2011. For the past six years he has also worked for the state of Connecticut as a prison chaplain.

He says he always knew he had an older brother.

“I just didn’t know what became of him,” Rabbi Eli says. “My mom, of blessed memory, always wanted to reunite the family. She tried to encourage my dad to reach out to him… My dad asked me to look into it. I did and found an Ostrozynski that didn’t seem to be Jewish and when I reached out to him on Facebook, I never got a reply back.”

Flash forward to Gerson’s arrival in West Hartford and the Shabbat dinner invitation from Rabbi Eli.

“I was finishing saying Kaddish,” Rabbi Eli recalls. “So, I had a lot of people coming over to the house that week.”

When the two walked from Shabbat services back to Rabbi Eli’s home, Gerson began talking about his family.

“He was telling me how his mom moved from New Jersey to Brighton Beach…I asked him about his dad and he said, ‘I have been estranged from my dad for my entire life.’

Gerson then told Rabbi Eli that his mother’s rabbi was a Chabad rabbi in New Jersey.

“I said to him, ‘One second, estranged from his father? Chabad rabbi? Is your name Mordechai by any chance?’ He said, ‘Yes. Aron Mordechai.’”

Rabbi Eli took Aron to another room to speak privately.

Rabbi Eli called his father right after Shabbat ended to give him the news.

“I said, ‘Guess who I had at my house last night?”

His father was amazed that his oldest son had been found.

On his end, Gerson called his maternal grandmother to tell her about meeting Rabbi Eli.

He says he always knew he had siblings and wanted to meet them and his father, but didn’t want to upset his mother, who had become disabled in her later years. She died in 2013.

Aron was always close to his maternal grandparents and took his grandfather’s last name Gerson when he turned 18 because they did not have sons. His grandmother, 88 and still living in Brooklyn, was pleased that her grandson had found his younger brother.

“She thinks it was meant to be,” Gerson says.

Soon after that fateful Shabbat dinner, Gerson and his father finally met at Rabbi Eli’s son’s upsherin (a religious ceremony particularly popular in Haredi Jewish communities in which, at age three, a boy receives his first haircut).

Tzvi hadn’t seen his oldest son, Aron, since his bris.

“That was really scary but it was nice, though,” Gerson recalls. “He gave me a big hug. We had a lot of catching up to do.”

“They really hit it off,” Rabbi Eli says. “They were literally talking to each other every day. It was a beautiful end of their life together, because two years later my dad passed away.”

Rabbi Eli believes their reunion was made possible by some divine intervention.

“I was just blown away that [we reunited] on the very same night that I finished saying Kaddish for my mother,” Rabbi Eli says. “The tradition states that whatever the soul can’t accomplish in our lives it will accomplish in our death…and my mom wanted to reunite the family.”