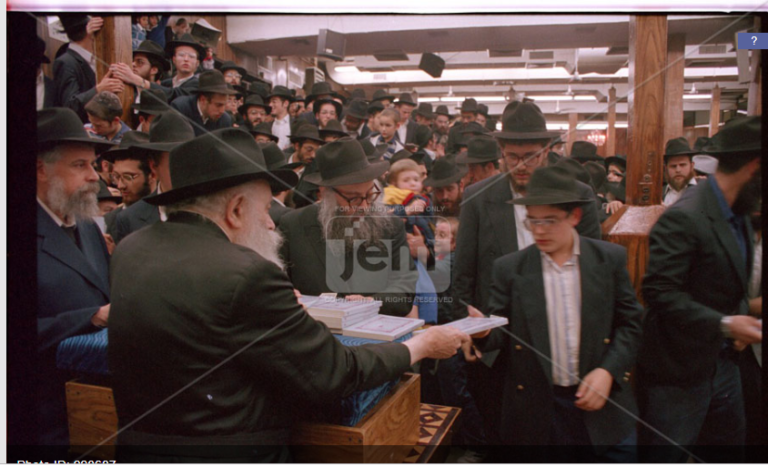 In a letter to fellow anash and shluchim, Rabbi Asi Spiegel, shliach to Tzfas, shared his heartfelt thoughts following a remarkable occurrence related to the 25 years since Gimmel Tammuz.

Recently something really extraordinary happened to me. An incident that is one of a kind. It started when I received a message. But not any sort of message- a message that I have awaited for ever so long. A message that I dream about day and night.

My phone beeped; someone had sent me a link to something, and even before I opened it, I knew what it would be. Finally, a picture of me standing in front of the Rebbe. Wow! How very marvelous!

The picture indeed is an old one from some twenty eight years ago, but the feeling filling my heart is new and stirring. In a flash my mind is full of memories of the many good times that I spent in the Rebbe’s presence. My whole day changes directions in that one moment. It is amazing to feel how many strong feelings can be evoked by seeing just one old picture.

Now it’s true that this is a bit personal and self obsessive but in our selfie generation to receive such a picture is not a small matter at all. Suddenly a button inside of me was pressed which threw me back in time to 770, to the most amazing and sorely missed time in the world: standing before the Rebbe as he gives me a kuntres.

Not many things are able to move me with such force, especially as we approach this Gimmel Tammuz – 25 years…

I am not the only one. Over the last few weeks, Jem has posted 25,000 new pictures of the Rebbe and Lubavitchers the worldover have rejoiced. Many people recognized themselves in the pictures and I have no doubt that they were elated and greatly inspired.

Thirty days before Gimmel Tammuz, I participated in a global farbrengen organized by Vaad Or Vchom Hahiskashrus. Amongst those who farbrenged was Rabbi Yisroel Goldstein, the shliach of the Rebbe in Poway. He said that when he stood in the White House next to President Trump, in front of the press from throughout the world, and spoke about the Rebbe with pride as a shliach should, he said inadvertently used this expression several times: “My Rebbe”.

That evening, he met a Satmer Chassid who told him how moved he was to see him in front of the whole world speaking of “my Rebbe”. He was moved by the fact that he didn’t just say “the Rebbe”, but rather said specifically “my Rebbe”.

Everyone knows of “the Rebbe”, and maybe not everyone is able to connect to this lingo, but “my Rebbe” spoke to him and moved something very deep inside of him.

Rabbi Goldstein urged the listeners to think about the great strength that this feeling of “my Rebbe” can have on ourselves and all those that we have an influence on. To speak about and throw around slogans about the Rebbe is easy, but speaking about “my Rebbe” is something much deeper and more meaningful, which has a far reaching effect on others.

And here I was standing in front of him. Waiting in line, knowing that in one more second the Rebbe will look at me and give me the kuntres. Suddenly, I feel how these times are coming back to me. My years in 770, by the Rebbe. How I love to reflect on those truly sweet years!

We find ourselves now in the days of massive hachanos for Gimmel Tammuz and for me to receive a picture like that in these days gives me a special chizuk which is indescribable.

Shortly after I received this picture, it was discovered that something of great significance was happening here.

Amongst the many posted pictures there are close to 4,000 pictures of the Rebbe distributing a kuntres on 6 Tishrei 5750. The Rebbe distributed a big envelope to every man, woman and child, which contained: a piece of Lekach, the michtov kloli from 6 Tishrei 5750, a maamar of the Tzemach Tzedek, “U’shavtem mayim bsason”, which was printed then for the first time, and a dollar bill.

Rabbi Zalmy Heber sat in his post on shlichus in Tacoma, Washington, studying the new pictures at thelivingarchive.org and noticed a picture in which his friend, Rabbi Mendy Cunin (shliach in Los Angeles), received this envelope from the Rebbe. Rabbi Heber sent the link to Rabbi Cunin. Inspired by receiving this picture, Rabbi Cunin immediately sat down to learn the michtov kloli that the Rebbe had given him then.

And now here comes the great gift that he received and immediately shared with everyone else: In an amazing stroke of hashgacha pratis, the first he’arah in this michtov kloli is full of explanations from the Tzemach Tzedek and Harav Levi Yitzchok, the Rebbe’s father, about the specialty of the number twenty five!!

The following is the translation of the hearah:

“Vov Tishrei: The day of the histalkus of my mother, Rebbetzin Chana a”h. Nistalek on Shabbos Teshuvah alos hamincha 5725 and it should be noted that this year is twenty five years from her histalkus. – Regarding the specialty of the number twenty five, כ”ה (and its connection to Rosh Hashana) – see: Likkutei Torah Nitzovim pages 47, 2-3. Sefer Halikkutim – Dach Tzemach Tzedek entry 25 (starting from page 32). Likkutei Levi Yitzchok on the Zohar (Volume one og. 64. Volume two page 53, page 370 and 405) and in multiple other places.”

Could there be a greater giluy from the Rebbe than this? In the midst of the massive hachanos for Gimmel Tammuz throughout the world, the Rebbe sends us material to learn about the specialty of the number twenty five so that we should be able to prepare ourselves properly.

The posuk in Shmuel (Alef, perek 25) says “ואמרתם כה לחי”, on which the Zohar explains that the “כה” must be connected to “חי”.

We have to connect the כ”ה, the time in which we find ourselves to חי.

Now is a special time of chayus. Der Rebbe lebt. Zaro bachayim af hu bachayim. The Rebbe is influencing the world today more than ever and if only one “opens up their eyes” and pays attention they will see this everywhere.

This year as we approach twenty five years to Gimmel Tammuz, we must arouse our feelings of longing to be reunited with the Rebbe. This explanation of the Zohar appears in Parshas Vaera after describing the weeping of the students of Rashbi on his histalkus.

But together with these strong feelings of yearning we have received a clear message.

This date of כ”ה, of 25, is a special date on which we must recognize that during the past twenty five years, despite the pain and all the obstacles and machlokes, we have built up, developed, grown and shown ourselves and the whole world that in the face of all adversity: זרעו בחיים אף הוא בחיים! Now, after twenty five such years there is no doubt that the chayus of the Rebbe in the world, and the connection of Am Yisroel to the Rebbe, have increasingly become an inseparable part of life itself.

And of course, we must take it upon ourselves to add more chayus in all of the Rebbe’s inyonim.