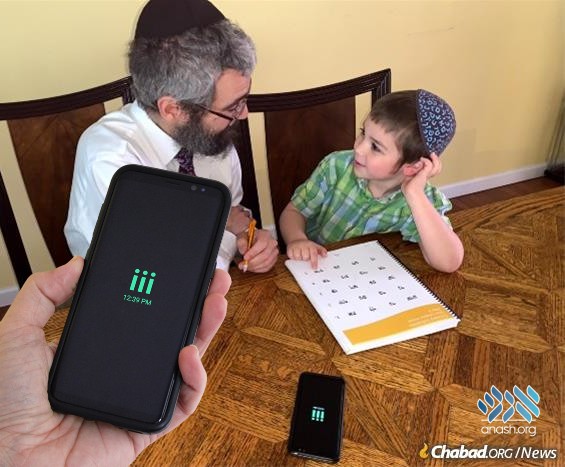 Cleveland Shliach Rabbi Yossi Marozov saw that his teen volunteers couldn’t focus due to excessive smartphone use. In response, he created the ‘PresentMode’ app which offers attention to the immediate while being available for urgent calls

Chabad-Lubavitch emissaries are legendary for wearing many hats at once. Embodying that image, Rabbi Yossi Marozov juggles roles that include director of Friendship Circle of Cleveland, congregational rabbi, personal mentor, fundraiser, Torah teacher and father of seven. Moreover, for the past two years, he’s also delved into inventing an app called PresentModeTM as a way to turn his phone into a tool to improve being present for everyone, including himself.

“The Rebbe,” he says, “was the ultimate role model for giving full presence to people. When people recall their private audiences with the Rebbe, they often tell of how the Rebbe made them feel so important—that they were the only thing that mattered to the Rebbe during their meeting.”

This gift of presence without distraction is something Marozov is inspired to share with the world in some small measure.

The concept is simple enough. When the app is engaged by a single tap, all notifications are paused except for phone calls, and all private incoming messages receive an auto-reply telling the sender that the user is “being present” with a person or task, and that they can call if the matter requires immediate attention. The phone’s screen goes dark, and the PresentMode logo glows in its center.

As soon as the user taps to exit PresentMode, all messages and notifications that came in while the app was working flow back into the notification bar.

Explaining the app’s simple strength, Marozov says, “PresentMode allows a user to keep their phone with them, not needing to turn it off or put it away. In PresentMode, if one’s family member needs to reach them or if there’s a crisis at work, they’re always covered. It’s a wonderful balance between staying reachable yet being present at the same time.”

The logo displayed on the screen serves a two-fold purpose. It gives the user peace of mind by reminding them that if something is really important, they can be reached, while it also lets others who are present know that they are being made a priority.

The rabbi relates that the concept came to him one Shabbat as he was walking home from the synagogue he leads and reflecting on a change he had been noticing during Friendship Circle programs. The teen volunteers, while still deeply committed to the special children with whom they were paired, were exhibiting lapses in attention.

“The children thrive on the face-to-face social interaction and the undivided attention they get from their teenage friends,” explains Marozov, “but since the advent of touch technology, many teens were engaging with their special friend and the screen simultaneously. I observed how something as beautiful and useful as the smartphone was reducing the teens’ ability to be present for themselves and others.”

The rabbi concedes that using the app takes effort at first. It’s definitely not for people who are addicted to their smartphones. Rather, it is a tool for individuals who have the willpower to keep their phones close by, and yet choose to be present.

One of the most beautiful ways that Marozov uses PresentMode is after a long day at the office. “Now when I come home from work,” he says, “I hand my phone to one of my kids and say, ‘Put me in the present.’ They excitedly turn on PresentMode, knowing they will now have my undivided attention.

“Ever since I started using PresentMode at home, my kids are happier, asking me to play with them and connecting to me in new ways. Their lives—and my life—have been enriched beyond my imagination.”

When Marozov originally thought of the concept, he made two phone calls—one to a patent attorney and the other to his mashpia (Chassidic mentor), who encouraged him to pursue the endeavor.

“The Rebbe taught us that technology can be used in very positive ways,” he says. “It is up to us to find the right way to harness these gifts so they improve our lives and the lives of others.”

“I view touch technology as an amazing boon. With my smartphone, I am creating a direct line between myself and countless other humans. We can interact, we can help, and we can give of ourselves more freely than ever before. But we need to make sure we do so in a prioritized way.”

In the months that the app has been in beta testing, the rabbi has received many testimonials, such as this one from Michael Gray, director of sales and marketing at TechnologyXperts, Inc.: “PresentMode is one of the best applications I could use in both my professional and personal life. PresentMode enables me to be present, in the moment, and add value to my relationships without the impedance of my phone. I cannot understand how I conducted business prior to being Present.”

Marozov suggests that people be thoughtful when starting to use PresentMode. “Start small,” he says. “Find a time in the day, or a particular situation where you can be fairly consistent. From there, it will grow, and transform how you maximize your smartphone to serve your best.”

PresentMode is currently available at Google Play for Android devices, and an iOS version is in the works.