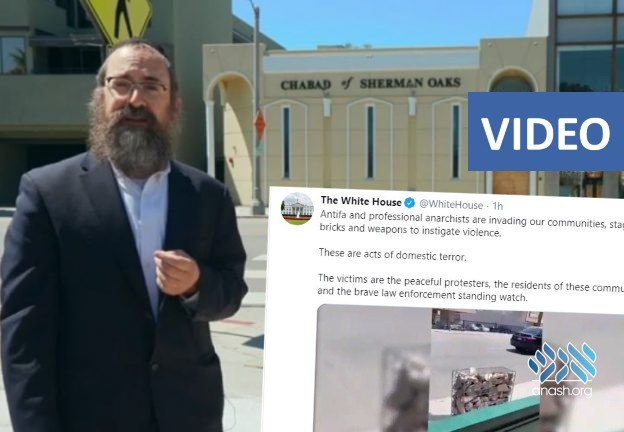 After a false claim that Chabad of Sherman Oaks’ security barriers were an Antifa instigation tool went viral on Twitter, shliach Rabbi Mendel Lipskier decided use the medium to encourage more mitzvos.

After a rumor implicating a Chabad House in festering unrest were spread worldwide and picked up by the White House, the shliach decided to utilize the unwanted fame to encourage thousands of mitzvos.

Last year, Chabad of Sherman Oaks, CA installed bollards, a security measure aimed at stopping potential attackers from ramming cars into people or buildings. During the riots last week in Los Angeles, rumors began circulating that these rock-filled barriers had been intentionally placed on the street by ‘professional anarchists’ to supply rioters with ammunition.

Chabad responded to the claims by removing the barriers and setting the record straight; however, the claim was picked by the White House which shared, then deleted, the post on its Twitter page.

“We had hundreds of people coming by to take pictures of the rocks,” shliach Rabbi Mendel Lipskier told Anash.org. “Police had to stop traffic… it was crazy.”

Yesterday, Rabbi Lipsker used the medium to share a video of himself encouraging people to take on a mitzvah – and share it with others – to increase justice in the world. “Last time you tweeted about us it wasn’t real, this time it is,” he wrote. “We’re fighting injustice with real justice and need your help.”

“Everyone is talking about the negative, the negative, the negative, and people are getting frustrated with that,” said Rabbi Lipskier, who has set a goal of inspiring 10,000 mitzvah pledges on the campaign wall. “This gives them a positive action they can take. We’re not doing any chiddush here, we’re just helping people focus on what they already know.

“If this happened in front of our building, it’s for a reason; it’s a sign that we need to spread this message of positivity. While some saw rocks to be used for destruction, we see stones that can be used to build.”

To participate in the mitzvah campaign, visit share4justice.com.