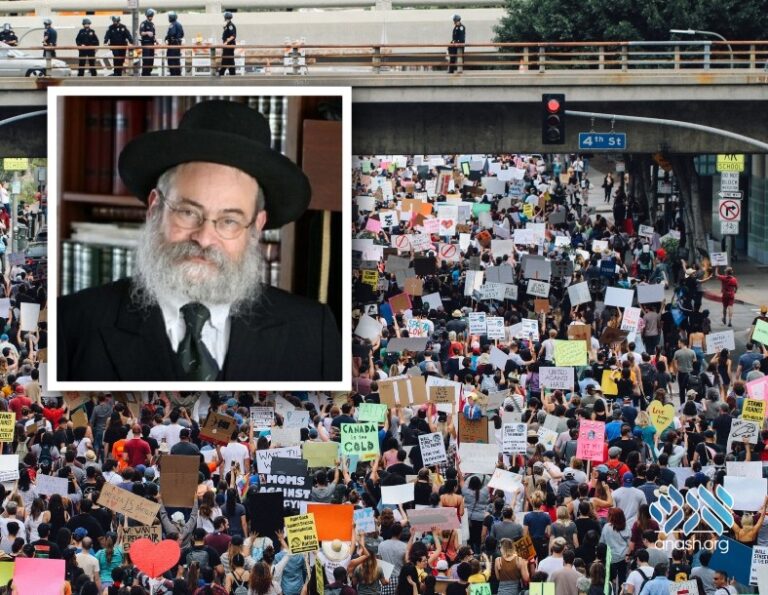 Chief Rabbi and Head Shliach to the Netherlands Rabbi Binyomin Jacobs sharply criticized the mayor of Amsterdam for allowing thousands to gather for a ‘Justice for George Floyd’ protest during a pandemic.

Amsterdam Mayor Femke Halsema was fiercely criticized after thousands of protestors gathered together at Dam Square in the capital city without regard for social distancing measures on Monday. The crowd of about 5,000 were participating in a solidarity demonstration over the death of George Floyd, police violence and perceived racism in the United States.

Halsema came under fire for not intervening to disperse the crowd from gathering in contravention of health regulations. The Chief Rabbi of the Netherlands, Rav Binyomin Jacobs, added his voice to the widespread criticism, writing on Jonet.nl that the Jewish faith’s value of preserving life should have precluded the demonstration, Jewish Telegraphic Agency (JTA) reported.

“Jewish law is clear: When lives are threatened, no risk is taken,” Rav Jacobs wrote. “The demonstration on Dam Square should never have been allowed.”

Rav Jacobs also raised the issue of the double standard in enforcing social distancing rules, noting that Holocaust commemoration events, normally held on May 4th, were canceled and that Dutch houses of worship have yet to reopen.

Halsema claimed that she was unprepared for the number of people who showed up, saying that organizers had told her they were expecting a few hundred people. When numbers increased, she felt intervening wouldn’t have been “responsible” at that point since they “would have had to take a tough line” which could have led to violence.

Nevertheless, the mayor, a member of the far-left Green Left Party is facing a no-confidence vote over the demonstration. The parliamentary leader said that everyone at the demonstration should go into quarantine for two weeks.

The Netherlands has taken a heavy hit from the coronavirus, with 46,647 confirmed cases and 5,967 fatalities, one of the highest death rates in Europe. The western European country, which never imposed a lockdown on its citizens, suffered the seventh-highest fatality rate per million in the world – higher than the United States.

The government, known for its liberal policies, also chose not to use coronavirus tracking apps out of concern of invading their citizens’ privacy.