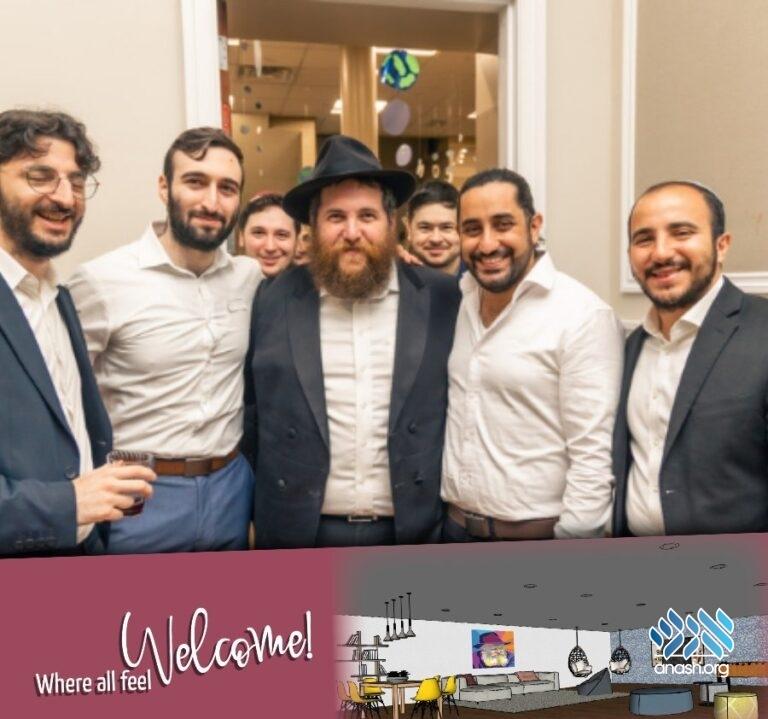 Brooklyn College shluchim, Rabbi Moshe and Riky Raichik, have created a revolution for hundreds of Jewish students. Now, they’re bursting at the seams, and need your help to get the students a new space.

“We hit it off right away,” Mike recalls.

The rabbi invited him back for Cafe Chabad—a weekly social event during the students’ lunch break. Sure enough, the next week Mike popped in at the Chabad house to join.

Mike grew up in a religious home and attended yeshiva, and lately, he’d lost touch with his Jewish observance and was at the time dating a non-Jewish girl. “That day I put on tefillin for the first time in seven years,” he confessed.

“There was no specific point where I can say everything changed for me in terms of Judaism,” said Mike. “But eventually it didn’t feel right to be dating someone who didn’t share my background.” After breaking up with his non-Jewish girlfriend, it didn’t take long for Mike to meet someone else—at Chabad of course.

“Every day that goes by we’re at risk of losing another neshoma,” says Rabbi Moshe Raichik. “Giving our students a safe space to come home to is literally saving one Jewish family at a time.”

When Mike eventually proposed to this Jewish girl, they turned to Rabbi Raichik to officiate the wedding.

“There are hundreds of ‘Mike’s’ out there,” Rabbi Raichik says. “Each one has a unique story, something that drew them away from their heritage for whatever reason.” But slowly, as Chabad of Brooklyn College grows in its reach and influence, “more Jewish students are showing up for its loving embrace.”

Whether it’s giving one-on-one relationship advice or hosting a Pizza and Parsha event between classes, Chabad of Brooklyn College is a home away from home for every Jewish student.

“Rabbi Moshe and Riky are never afraid of my questions,” says Hannah, a sophomore who joined this semester’s Sinai Scholars program, an eight-week course on fundamental Jewish ideas. “It’s a space where I feel completely comfortable.”

While Hannah will vehemently challenge a concept like marrying Jewish, outside of class she’s a devoted board member. Hannah is one of the many students who come from communities like Crown Heights, Flatbush, Boro Park, or Queens and reconnect with what they grew up with.

“Chabad is an experience every Jewish student deserves to have,” Hannah says.

With an average of thirty to fifty students attending Friday night dinners and hundreds turning out to holiday events like Chanukah and Purim parties, Chabad at Brooklyn College has become the center of Jewish life on campus.

“I never imagined Chabad being able to thrive at a commuter school known for its weak social life,” says Riky Raichik, Chabad’s co-director. “But even without the dorm culture, we’ve slowly and steadily built up a truly strong core.”

Now nearing the end of a two-week fundraising campaign, Chabad of Brooklyn College is close to meeting its goal of raising money for a down payment on a new space. “We’ve been operating out of a regular house in Flatbush,” Riky says. “You’d never guess that so much happens here.”

The new location for Chabad of Brooklyn College will feature a designated student lounge accessible at all hours. “Our goal was to provide a place that could really become a second home,” Riky says. Two guest suites will allow students to sleep over for the full Shabbos experience and the large recreation area will allow for more weekly classes and events. “We’re making use of every square foot,” says Riky.

Students can swing by the Chabad house for coffee or wifi between classes, then head back at the end of the day for a Tanya class, cooking club, or a cup of tea with the Rebbetzin as they discuss Taharas Hamishpacha.

“We’re bursting at the seams,” adds Rabbi Raichik. “We owe it to our students to give them a new space.”

Help them reach their goal! Donate to the campaign by visiting BrooklynCollegeChabad.com/