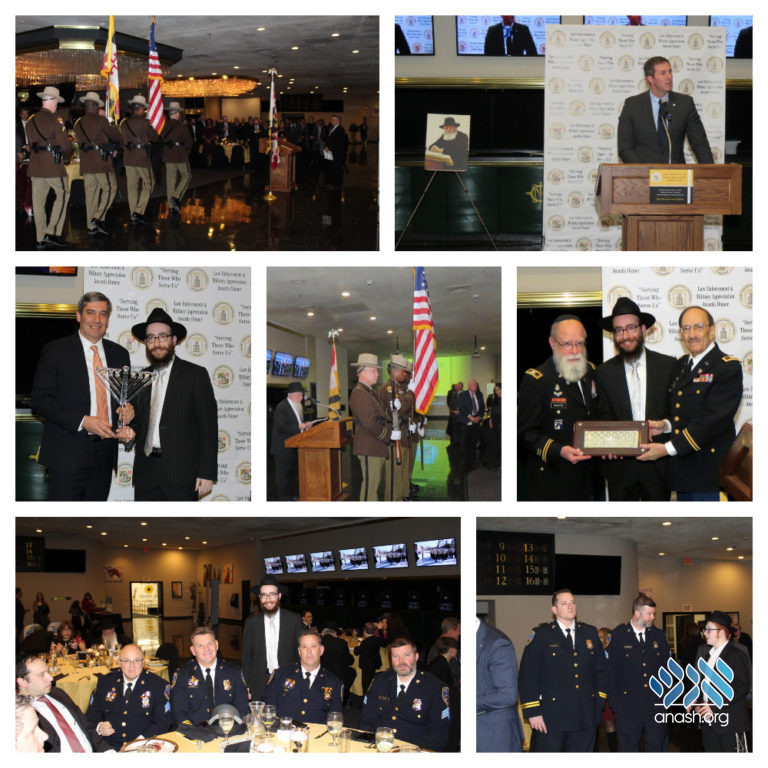 At a recent awards dinner for Men and Women in Uniform by Jewish Uniformed Service Association of Maryland-Chabad (JUSA), James M. Murray, Director of United States Secret Service, saluted the Shluchim for their important work.

The Jewish Uniformed Service Association of Maryland-Chabad (JUSA), founded in 2012 by Baltimore Shluchim Rabbi Chesky and Chani Tenenbaum, provides outreach to men and women in uniform, offering programming and support to Law Enforcement and Military personnel.

The event, attended by law enforcement and military members as well as supporters of the organization, celebrated JUSA’s motto “Serving those who serve us” and honored specific individuals who have done great service for the local and national community.

The ceremony opened with the presentation of colors by the Maryland State Police Honor Guard, followed by The Pledge of Allegiance by Howard Libit, Director of Baltimore Jewish Council, and the invocation, given by Rabbi Elchonon Lisbon of Chabad of Park Heights.

The event was emceed by WBAL anchor and reporter Robert Lang. Baltimore County Police Chief Melissa Hyatt received the Police Leadership award in recognition of her being both the first Jewish chief as well as the first female chief of the county. Lt. General (Retired) H. Steven Blum was recognized as the first Jewish General holding the position of Chief of the National Guard Bureau.

The Firefighter Memorial Valor Award was given to the parents of Maryland Deputy Fire Marshal and RVFD Captain Sander Cohen who was killed in the line of duty in 2017. The Public Safety Community Service Award was awarded to Mr. Calvin Butler who was recently promoted from CEO of BGE to CEO of Exelon Utilities. Mr. Carim Khouzami, the newly appointed CEO of BGE, accepted the beautiful crystal Menorah, corresponding to the light that BGE brings to the city of Baltimore, on his behalf.

Many in the attendance remarked that the simple elegance and genuine feeling of gratitude that embodied the event left a great impression.

To learn more about JUSA go to, www.jewishusamd.org