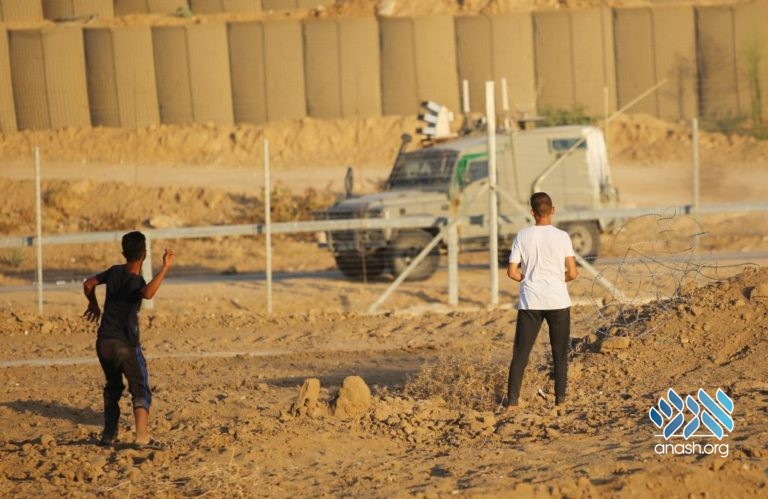 Three rockets were fired at southern Israel Motzoei Shabbos by Gaza terrorists, the IDF said, with two of them downed by an Iron Dome missile. A third rocket fell in the backyard of a house in Sderot. Rocket fragments were found in the yard. Two people were injured by shrapnel, and two others suffered shock. All were treated at Barzilai Hospital in Ashkelon.

Red Alert sirens sounded for a second night in a row in southern Israel Motzoei Shabbos. The alert came in response to the rocket attacks. Gaza terrorists fired a rocket at southern Israel on Friday night, setting off alarms and sending residents scurrying for cover. B’chasdei Shamayim, there were no injuries from the rocket, but two people were injured as they sought shelter. They were treated at Barzilai Hospital in Ashkelon. The attack Friday night prompted an Israeli response, with planes knocking out two underground Hamas terror targets.

Meanwhile, the condition of 18-year-old Nachum Navis, one of the teens injured in a car-ramming terror attack in Gush Etzion Friday afternoon, was somewhat improved Motzoei Shabbos, doctors said, but he was still in danger due to the serious nature of his wounds. His sister, 20-year-old Noam, was also injured in the attack as they waited at a bus stop for a ride. She was hospitalized with moderate wounds, and was also reported to have improved. The public was asked to daven for the refuah shleimah of Nachum Elimelech ben Zahava Rivka and Noam bas Zahava Rivka.

The two were injured as they waited for the bus outside the town of Elazar in Gush Etzion, on their way to join their family on vacation in the north. IDF officials said that they apparently were standing outside the concrete barriers that have been set up at all bus stops in Yehudah and Shomron. The vehicle driven by an Arab terrorist ran right into the siblings at high speed, then lost control and overturned. As the driver was attempting to open the door to escape, a police officer shot him dead.

The terrorist was identified as 26-year-old Al’a Harimi, a resident of a village in the Beit Lechem area. He was a member of Fatah and identified with Islamic Jihad. Security officials said that he was “inspired” to carry out the attack by other recent attacks, such as the stabbing attack of an Israeli police officer on Thursday. The officer was moderately wounded in the Old City of Yerushalayim when two terrorists attacked him near Shaar Shalshelet. One of the terrorists was eliminated, while the other sustained injuries when police shot at them.