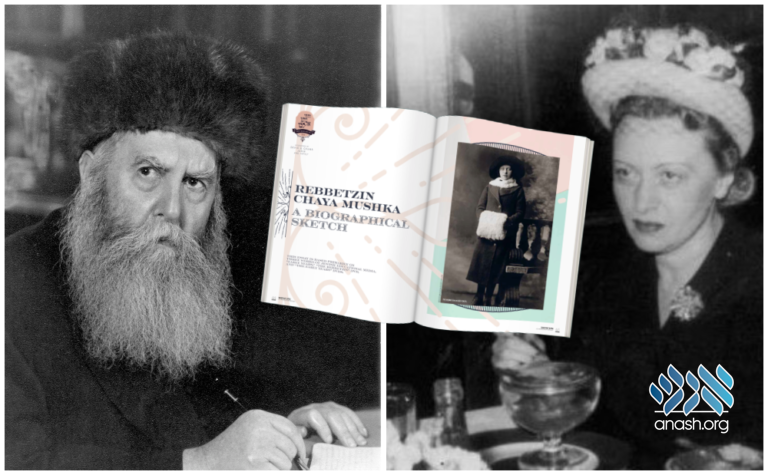 In honor of Chof Beis Shvat, A Chassdisher Derher has compiled a biographical sketch of the Rebbetzin Chaya Mushka’s life and legacy.

A Chassidisher Derher is proud to present a beautiful biographical sketch of the Rebbetzin’s life and legacy.

“The trait of mesiras nefesh instilled in the Rebbetzin from such a young age is evident in many of the stories about the Rebbetzin from her young adult years in the Soviet Union, then under Nazi Germany, and in other situations.

“Schneersons don’t fear anyone,” the FrierdikerRebbe told his captors when he was arrested, and the Rebbetzin was a personification of that trait. In her quiet, regal manner, she never compromised on her beliefs and always did exactly what she felt was right, regardless of the consequences, even in circumstances of discomfort or outright danger.”

As a young girl she would spend a lot of time with her father, the Frierdiker Rebbe, and as she grew older he entrusted her with many important missions.

She was his right hand throughout much of their time in Lubavitch and showed time and again that she could be trusted with highly sensitive situations.

Upon her marriage to the Rebbe she quickly became his steadfast supporter and loyal partner. In the early years of their marriage, the Rebbe and Rebbetzin moved many times and encountered many difficulties. Yet, through it all, the Rebbetzin remained at the Rebbe’s side and, with immense dedication, fought to secure everything that they needed, and only accepted the highest standard.

“Kosher food was very hard to come by, and the Rebbetzin would go to great lengths to obtain food with unquestionable kashrus. For chalav Yisrael, the Rebbetzin would travel to a farm to watch a farmer milk his cow. For meat, the Rebbetzin went to a local kosher butcher shop to watch their process up close, and only when she felt it was adequate, did the Rebbe agree to buy from them. Reb Eliyahu Raichman once visited their home in Paris and saw the Rebbetzin choosing and grinding kernels of wheat for the Rebbe’s matzah. The Rebbetzin explained to him that the Rebbe doesn’t eat anything from outside his home.”

The year 5701 brought the Rebbe and Rebbetzin to America’s shores, where they would begin a new chapter of their lives.

Even once the Rebbe assumed the nesius, Rebbetzin Chaya Mushka stayed true to whom she had always been and kept a discreet, modest profile.

There have been many tales told and many incidents related that show the Rebbetzin’s incredible sensitivity to other people as well as her quick wit and profound intelligence.

The Derher is committed to bringing informative and inspiring content to Chassidim, old and young alike, around the world. Partner with them in their mission by participating in the Derher Raffe.

Use code 22 when you buy 3 tickets or more to receive 2 extra tickets!

Visit raffle.derher.org for more information and to purchase tickets.