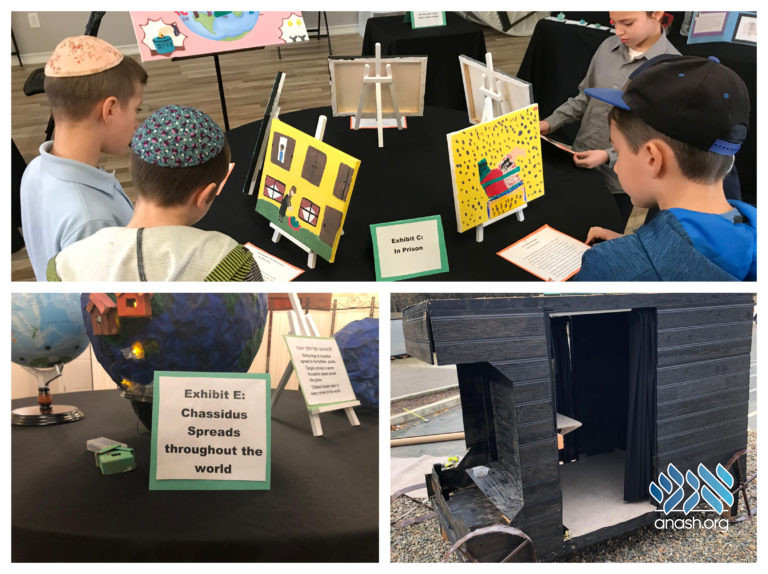 Children in Sacramento Jewish Academy created a ‘museum’ to bring the story of Yud Tes Kislev to life.

“I had never heard about the secret messages hidden in the Alter Rebbe’s food.”
“The life size black carriage is so cool – and the video playing in it is amazing!”
These comments are typical of those expressed by the visitors to the special 19 Kislev “Museum”. The special exhibit was crafted, curated and displayed by the students of the Sacramento Jewish Academy located in Granite Bay, California,

Each detailed exhibit educated the visitors with regards to another aspect of the story of Chassidus and 19 Kislev. After entering through a specially decorated doorway, visitors proceed on a self-guided tour through the history of Chassidus, including the famous moshol of the Alter Rebbe about the king’s diamond being crushed to save the prince’s life.

After learning about the Alter Rebbe’s life, participants entered into a life-size black carriage, reminiscent of the carriage used to take the Alter Rebbe to prison. There they watched an animated lego video depicting the story of 19 Kislev, all created by the students of the mechina program at SJA.

Beautiful canvas artwork depicted the storytelling how the Alter Rebbe received Kosher food in prison and how the Chassidim first learned that he was alive. Other details in the Alter Rebbe’s imprisonment, including the Ayeka story, were also displayed through beautiful artwork.

The following exhibit shows a 3D celebration of the Alter Rebbe’s geulah, accompanied by a musical Padah beshalom, song and played by the students.

The exhibit then fast forward to today when Chabad Houses span the globe, a 3D globe with lighting up “Chabad Houses” showed this modern-day phenomenon and leads us to the culmination of the accomplishment of Chassidus.

The students of SJA worked very hard on this project and were guided by their teachers, Morah Sheina, Morah Menucha and Morah Devorah. Rabbi Hecht, Rabbi Eidelman and the temimim Berel Sasonkin and Shmuly Gniwicsh