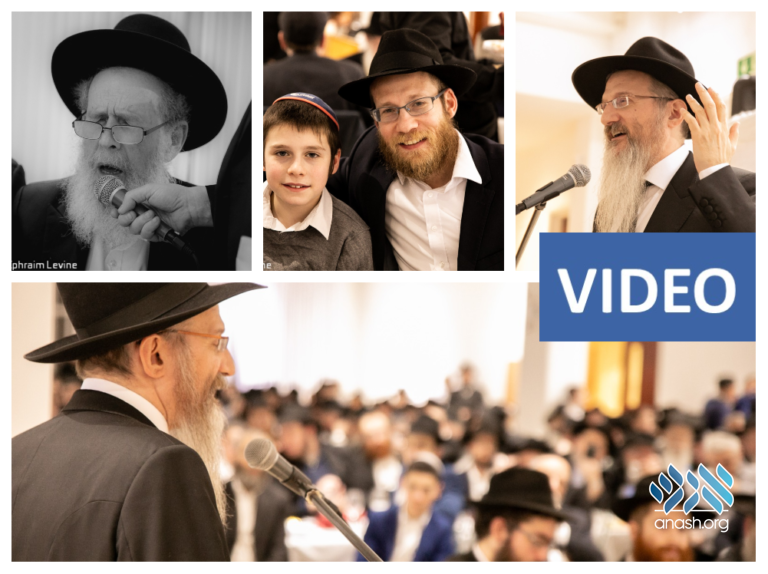 Over 500 gathered in London for the central Yud Shvat farbrengen with Rabbi Berel Lazar who encouraged each participant to connect 10 yidden to the Rebbe.

There was an excitement and a feeling of true Achdus in the air, as over 500 men and women from across all Anash communities in London gathered in the Od Yosef Chai hall in Hendon, to farbrengen and celebrate 70 years of the Rebbe’s leadership.

The participants came from Edgware, Stamford Hill, Hendon Chabad, Kingsley Way, Beis Gavriel and Heichal Menachem. The hall was beautifully set up with a catered meal and music was played by Rabbi Yisroel Cyprys.

The evening was chaired by the organizer, Rabbi Getsel Itzinger who set the tone by reminiscing about his childhood memories of Yud Shevat shnas ho’esrim – 20 years, leading to the milestones of 30 and 40 years, and now 70.

He then introduced Rabbi Shmuel Zajac who reviewed the first two paragraphs of the ma’amar Bosi Legani , followed by an English translation by Rabbi Yitzchok Schochet.

The highlight of the evening was the keynote address by Rabbi Berel Lazar who flew in from Moscow that afternoon, taking time from his incredibly packed schedule to address the crowd on the meaning of this awesome day.

The participants were uplifted and inspired by his important message, where he galvanized anash to each reach out to 10 yidden and connect them to the Rebbe.

“The Rebbe asked for this is 5711,” Rabbi Lazar said, “and when the deadline passed and not enough Chasidim informed him of their success in this, he extended the deadline. The Rebbe never spoke of this again until Sukkos of 5752,” he recounted, “underscoring the importance of this directive and emphasizing that it is incumbent upon every one of us to do so.”

Rabbi Lazar then continued with many stories of his efforts to fulfill this directive in Russia, keeping the crowd entertained and at the same time, empowering them to also reach out to those they know.

Rabbi Yitzchok Meir Hertz the Rov of Anash of NW London and the Rosh Yeshiva of the Yeshiva Gedola was honored with bentching. Many anash members stayed to farbrengen with Rabbi Lazar after the event. The farbrengen went on until well after 2 AM, leaving every Chossid that was there with a clear message of hiskashrus and focus.