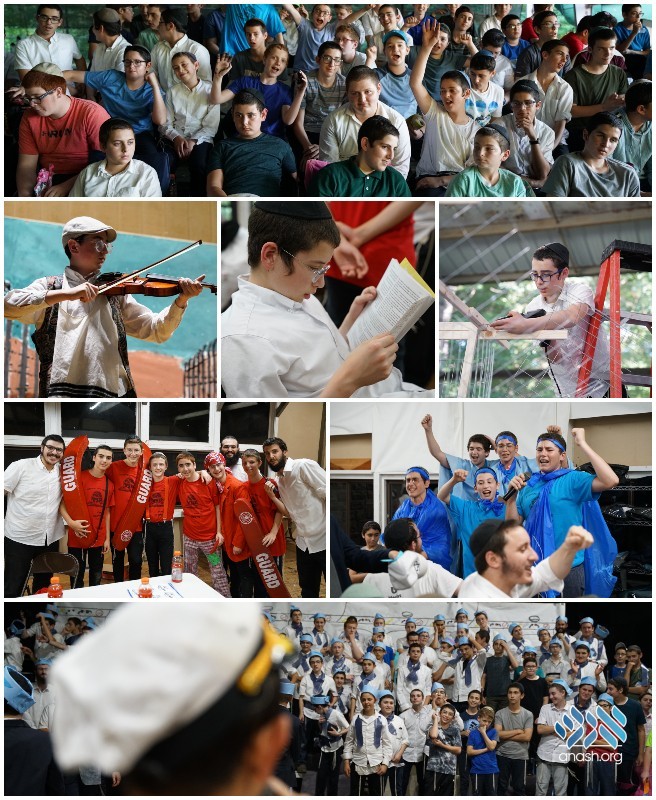 With YSP in a different location for the summer, when they discovered the AC unit had been tampered with, it was a big deal. The campers were in for a surprise when it turned out to be color war…

All Talmidim were summoned to the Zal for a serious matter. The AC unit had been tampered with and everyone need everyone to sign waivers.

Color War! The Zal was filled with excitement and anticipation to see who would be their teammates, colonels, lieutenants and generals in this epic battle.

The first showdown between the two teams ‘Baal Esek’ and ‘Yoshev Ohel’ was in the Amphitheater. Each team prepared a 7 minute skit that teaches the crowd a Halachah in humorous fashion.

Although it may not seem as glamorous as the Theme Play or Grand Sing, Tanya Baal Peh really does “win the war”. A disproportionate amount of points were allotted for every Talmid who memorizes Tanya Baal Peh.

Color war in YSP is all about the Talmidim taking a leading role both in the acting and producing of the production. Using their talents in acting, building, sketching and all areas of creativity the campers brought the color war themes to life.

After much practice and hard work, both teams competed on the stage. Who will succeed in expressing their team’s theme on through drama? Eloquent backdrops, props and outstanding acting really drew the audience onto new worlds leaving them with impactful lessons in how to serve Hashem.

The next day, the sounds of drilling, sawing and talmidim directing each other resounded from the basketball pavilion, as both color war teams brought their visions to life. Beautiful detailed paintings and buildings were put together by the talmidim for the momentous occasion.

Finally, the ultimate event of Color War arrived. Hours of hard work and practice culminated in an experience like nothing else. The energy in the air, the beautiful songs, drawings and props really make this event one of a kind.

Not everyone is aware of how many elements come together to make a truly “grand” sing, such as: The grand entrance skits, nigunim, theme songs, comedy songs, comedy skits, “Grammen”, Staff gift jokes, as well as fresh donuts and drinks for the Talmidim.

By the end of the evening every Talmid and staff member was truly exhilarated and inspired for the future.