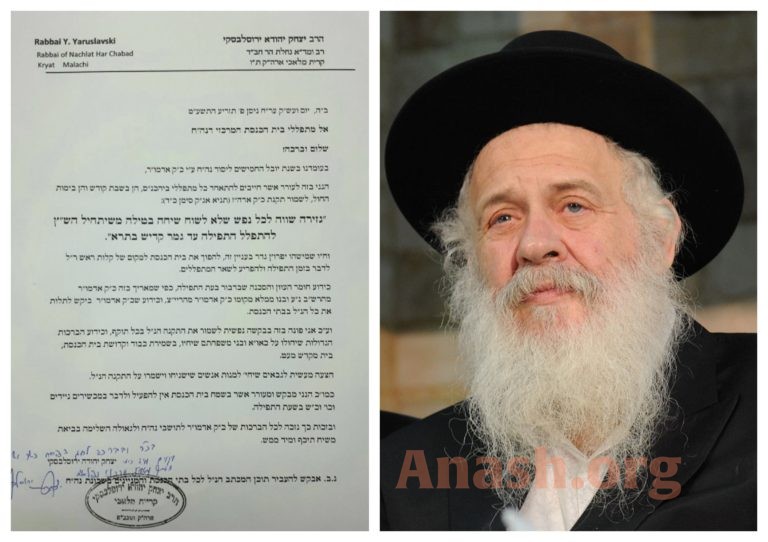 There’s been a little less buzz in Nachlas Har Chabad this past week.

The rov of the prominent Chabad neighborhood in Eretz Yisroel, Harav Yitzchok Yehuda Yeruslavski, penned an open letter pleading with the community to improve their davening and eliminate any talking in local shuls. The timing of the letter coincided with the ongoing celebrations marking the fiftieth anniversary of the founding of the neighborhood by the Rebbe, in 5729 (1969).

Quoting the Alter Rebbe in Tanya, Rabbi Yeruslavski wrote, “I’ve come to act as an agent of our sages, of blessed memory, to enact a decree to apply equally to everyone: no idle talk is to be spoken from the moment the chazzan begins to daven until the end of the last Kaddish.” (Igeres Hakodesh, chapter 24)

The letter goes on to repeat the stern warnings of the Mitteler Rebbe, Rebbe Rashab and Frierdiker Rebbe of the perils caused by talking during davening. As the Mitteler Rebbe writes: “For who doesn’t know of the harsh heavenly accusations (kitrugim) that are upon us? No one notices on whose account this disaster has befallen us. In my view, this evil thing [talking during davening] increases Hashem’s severity.” (Igros Kodesh, vol.1, p. 271)

The Rebbe requested numerous times that the Rebbeim’s statement on this matter be printed and posted in shuls. In one such letter, the Rebbe writes, “Regarding the talking in shul, they should post on the walls of the beis medrash siman 24 of Igeres Hakodesh and a copy of the Moda’ah Rabbah (Important Notice) written by the Rebbe Rashab on the importance of listening to keriyas haTorah.” (Igros Kodesh, vol. 3, #630)

The above referenced Moda’ah Rabbah is a monumental notice written by the Rebbe Rashab which was posted in the shul in Lubavitch before Shavuos, 5656 (1896). In that notice, the Rebbe Rashab requests that everyone pay close attention to keriyas haTorah by following along in a Chumash and not talking even between aliyos. The Rebbe Rashab concludes that notice by saying: “It is certain that one who listens to keriyas haTorah as the halacha requires, is not only fulfilling the mitzva of Hashem, but by merely respecting the Torah, the Torah will arouse mercy for him and the members of his household, b’ruchnius and b’gashmius.”

Rabbi Yeruslavski recommended designating shuls as cell phone-free zones, and appointing someone to ensure that the instruction of the Alter Rebbe is adhered to–an idea that is brought up in the aforementioned letter of the Mitteler Rebbe saying, “They should also appoint a trustworthy supervisor. He will not show favor to anyone and will be willing to disgrace any person who violates the vow. Let him do it in my name and with my power, and I will endow him with the strength and might, to the extent that I am able. They should do this sincerely and bring it to fruition. This will literally resurrect me and revitalize my soul.”

The community’s response to the letter has been positive. In a conversation with Anash.org, residents of Nachlas Har Chabad reported that the letter made a strong impression and silence during davening has become the norm. They mentioned one instance when a congregant began talking and one of the shul’s gabboim did not hesitate to reprimand him saying, “Why are you talking? Didn’t you see the rov’s letter?”

To learn more about proper behavior in shul, visit yagdiltorah.org/shul/default.htm