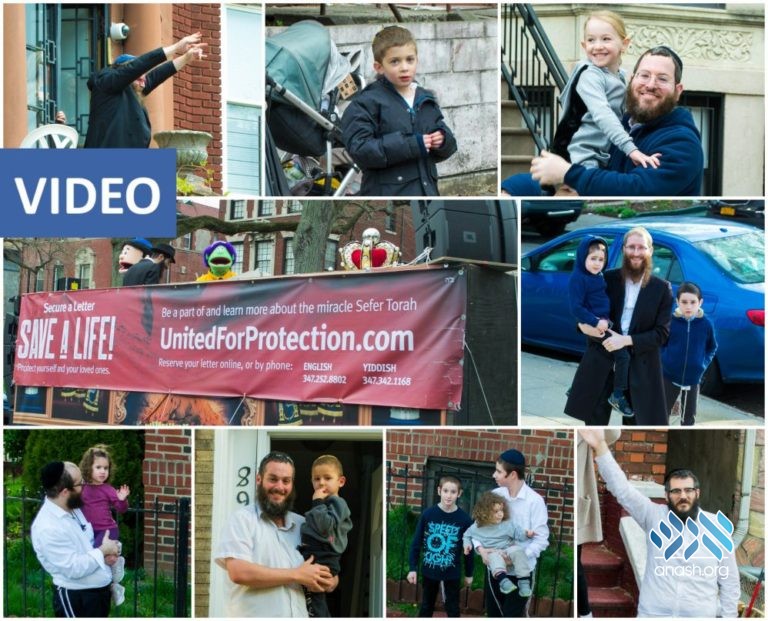 After weeks of living under lockdown and grappling with illness, mourning and stress, Crown Heights welcomed a ray of sunshine – a concert on wheels, sponsored by United For Protection – with open arms.

It’s been a difficult few weeks for the Crown Heights community.

“So many people have been locked up for weeks, and didn’t crack a smile in days,” Berl Junik, an organizer of the United For Protection Torah, told Anash.org.  “Everyone is broken from so many terrible tragedies.”

Together with Shloimy Greenwald and Zalmy Cohen, his partners in the lifesaving initiative, he decided to do something to revive the community’s spirits and infuse the streets with the simcha of Yom Tov: a chol hamoed concert on wheels.

The familiar ‘Hachnasas Sefer Torah Truck’ drove through the neighborhood, bringing the sounds of upbeat music and joyous nigunim with it. Singers Eli Marcus and Baruch Sholom Blesofsky sang as Choni Milecki played and families came out on their porches to watch. As they made their way around Crown Heights, popular Mitzvah Boulevard characters greeted the audience and led them in the 12 pesukim.

“I believe this was the first roving children’s rally that has ever taken place,” Choni Milecki told Anash.org. “We did pesukim and sang nigunim on every single block, and the kids were part of it. Instead of everyone watching live on their computer screens as they did so many times over the last few weeks, they had this amazing opportunity where the rally came to them!”

The joy was palpable; children with beaming faces danced at their windows and on their porches as their smiling parents looked on.

“It was unbelievable,” Milecki said. “You saw the smiles on the faces of the kids; people were genuinely, genuinely excited.”

The feedback has been amazing, organizers shared.

“Baruch Hashem, it was a tremendous success,” Junik said. “We have received dozens and dozens of thank yous. We received phone calls during the day… children who were watching the whole day on the live feed were begging us, ‘Please come to our block!’”

Milecki has also been hearing from tens of people, most of whom he’s never met. “They reached out to thank me for my part in this amazing experience. It uplifted the kids, uplifted the parents, uplifted the grandparents… even after the truck came to their street, it kept the kids entertained the whole day.”

“One of the purposes of the truck was to raise awareness and money for the miracle sefer torah,” Milecki explained. “But something even greater was achieved: we brought real simcha to the whole community.”

“It was a real revival, lifting people up,” Junik said.