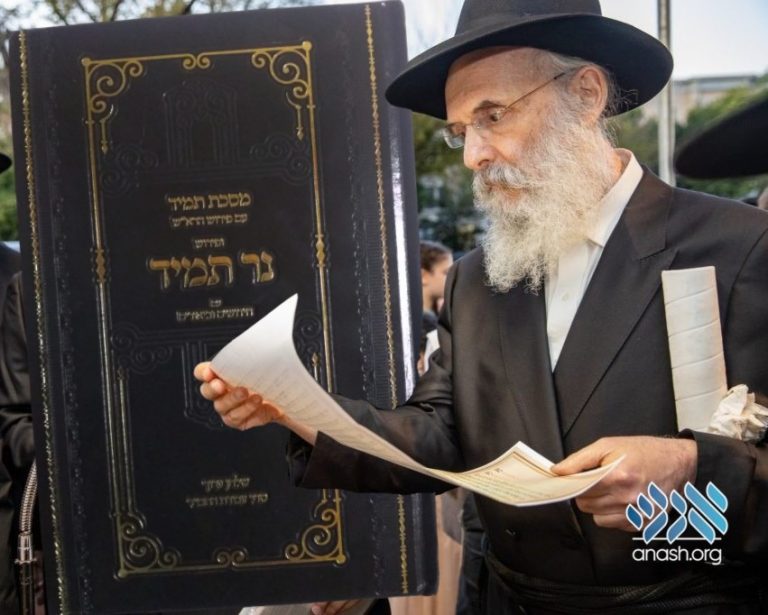 In 5749, the Rebbe encouraged the study of Maseches Tomid during the Nine Days. 31 years later, Harav Yosef Heller and his grandson released a sefer containing the Masechta with commentaries, including the Rebbe’s chiddushim.

A new groundbreaking sefer published in time for the Nine Days is the result of a collaboration between Harav Yosef Heller, and his grandson Menachem Heller.

Inside the new sefer one can find Maseches Tomid flanked by commentaries, including one that is being published for the first time.

Masechtes Tomid is the shortest Masechta in the Shas, containing only seven dafim. The tractate primarily discusses the korbon tomid, as well as some other avodos in the Beis Hamikdosh. It is unique in the fact that it does not contain any machlokes, instead it is written as a historical description of the avoda.

In 5749, the Rebbe encouraged the study of Maseches Tomid during the Nine Days. The Rebbe explained that due to its brevity, one is able to finish it and make a siyum. In addition, the study of Torah on the subject of the Beis Hamikdosh was encouraged by the Rebbe during this time of the year.

The new sefer contains the Masechta, along with the commentary of the Rosh, which is considered the foremost commentary on the Masechta, similar to Rashi on other Masechtos. The sefer also contains ‘Ner Tomid’, a commentary written by Harav Boruch Bendit, an acharon who lived in the time of the Alter Rebbe. His explanations were printed only once, in his lifetime, and was not reprinted in the 100-plus years since.

A special feature of the sefer is a collection of the Rebbe’s chiddushim on the Maschta, published in such a format for the first time.

“The chiddushim of the Rebbe were added to give the greater Yeshiva world a chance to ‘taste’ the wonderful Torah of the Rebbe, which open a new perspective on any subject learned,” the editors told Anash.org.

The new sefer is available at SeforimDeals.com. Free shipping in Crown Heights on orders over $49.