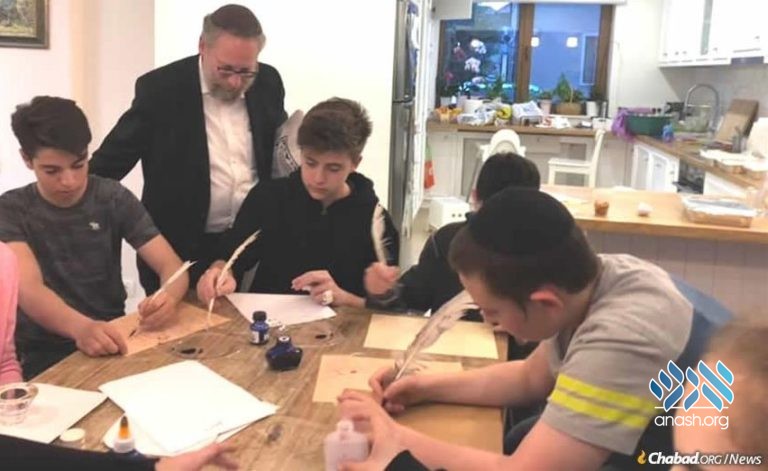 It’s nearly 10 p.m. in Bucharest, Romania, when Jerusalem-born Rabbi Naftali Deutsch finally has a bit of time to talk. He speaks from the bustling kosher restaurant recently opened in the capital, the first in decades in this nation of rich Jewish history. Our conversation—in which he shares the trials and triumphs that he and his wife have experienced as Chabad-Lubavitch emissaries in Romania—is frequently interrupted as he returns greetings, provides instructions and bids patrons “good night” in a stream of Hebrew, English and Romanian. Much has changed since the Deutschs arrived two decades ago as newlyweds to foster Jewish growth and connection in this central European country, though their work is still going strong.

Q: You are from Jerusalem, and your wife is from Kfar Chabad, Israel. What drew you to Romania, and what did you find when you came 20 years ago?

A: After we got married, we were sure that we would serve somewhere. We considered several options, including those with very established Jewish communities and those with zero infrastructure. When we heard about Romania, it felt right. There are synagogues, Jews, a venerable and functioning community, yet there was clearly a lot for us to do.

At that time, in 1999, the Jewish community was almost exclusively made up of local-born Jews: Holocaust survivors and their descendants.

Before the Holocaust, there had been a million Jews in Romania. By the war’s end, there were still more than 300,000. Through the years of Communist oppression, hundreds of thousands immigrated to Israel, as well as the United States, Canada and Brazil.

By the time we arrived, there were—as there are now—an estimated 10,000 Jewish people here. About 4,000 were living in the capital city of Bucharest, and the balance were scattered in dozens of small communities throughout the country.

A major shift came a few years later when Jews from other countries—Israel, America, the United Kingdom and France—came here for educational and business opportunities. While the Romanian Jewish Federation focuses on local-born Jews, our services and events are geared towards Jews from abroad as well.

Q: Can you describe some of the community’s notable accomplishments that you have helped make happen in the past 20 years?

A: Shortly after we came, I became rabbi in a beautiful synagogue, the oldest in Bucharest, around 200 years old. At that time, services were held once a week. We added to that, one service at a time, and we are proud to now have daily services in our fully renovated sanctuary.

So much has developed from the ground up in the same way.

In 2002, we founded a nursery and kindergarten, which has grown to include a day school in 2007. We now educate 70 children there. Reflecting the international nature of our community, the children are all taught Romanian, Hebrew and English.

An interesting anecdote: Following the Israeli style, we wanted our kindergarten to accept children from age 3 months and up, which is unheard of here. To do so, we actually lobbied parliament to amend the law so that we could legally care for children that young.

More recently, we opened a kosher store and restaurant. It’s beautiful to know that people are now able to keep kosher with ease. In a sense, this is continuing the work of the Rebbe who ensured that even in the most difficult years of Communist rule, kosher meat was available through the selfless shochatim who lived here as his emissaries.

Q: Can you share more about the connection between the Rebbe and Romanian Jewry?

A: We actually researched and published a book about it. One important link in the chain was the Chief Rabbi Moses Rosen, who seemed to somehow balance being both a learned Orthodox rabbi and a loyal Communist.

The Rebbe worked tirelessly for the right of Romanian Jews to emigrate to Israel. At the same time, he forbade Rabbi Rosen from leaving, knowing that there would be no one to replace him.

I remember in 1992, just three weeks before the Rebbe suffered the stroke that curtailed his ability to speak, Rabbi Rosen came to meet the Rebbe in private. When I watched the Rebbe escort him to the door at 2 a.m., I never imagined that I would one day serve in his country.

Q: You mentioned the Rebbe. Who else has inspired you in your work?

A: Of course, our greatest inspiration comes from our community. When a Jewish family agrees to keep kosher, we are inspired to make sure there is plenty for them to choose from. When a couple decides to live in accordance with the laws of family purity (niddah), we are galvanized to make sure that the mikvah is as beautiful as possible.

Special mention is due to the Rohr family. Along with Rabbi Moshe Kotlarsky [vice chairman of Merkos L’Inyonei Chinuch, the educational arm of the Chabad-Lubavitch movement], they have been loyal and visionary partners in our work.

I vividly recall the phone call I got well after midnight one spring night in 2002. It was Sami Rohr, who was then in his upper 70s. After exchanging niceties, he asked me what I was doing for the local children. Within minutes, he committed the funds needed to start our kindergarten, including money to purchase a facility and a three-year salary for a young couple to direct the school.

There is no question that their dedication to our success has pushed us to do more.

Q: Historically, the Romanian Jewish community is very diverse, with the north serving as the incubator of many Chassidic groups now in New York and Israel, and the south a stronghold of Ladino-speaking Sephardim. What is left of that today?

A: I know a few Sephardic Jews, but they are now in their 90s.

When we arrived, much of what had once been here was gone—lost to the ravages of the Holocaust and successive waves of emigration. Still, the Jews in the countryside tended to be more traditional and closer to Jewish observance than the city-dwellers.

Today, there are still 42 Jewish communities dotting Romania, and we serve them all to the best of our ability, notably by sending pairs of rabbinic students to lead them for Passover and the High Holidays.

Q: Are there youth in Romania? What is done for them?

A: The majority of the Jews here are elderly, perhaps 80 percent of the population. But there are young people. We have an active CTeen chapter and CTeen junior, coordinated by my wife, Risha.

Incidentally, another wonderful project she directs is Baby Chai, which lends furniture and other gear for babies from newborn to age three. As far as we know, this is the only such program in Romania, and it has been very well received.

To further serve the needs of young people, we were recently joined by Rabbi Yitzchok and Devorah Raskin, who will be leading youth activities, as well as programs at the Chabad House here in Bucharest.

There are also many Jewish students, especially Israelis, in Cluj Napoca, known among Jews as Klausenberg. Rabbi Dovber and Fraidy Orgad, who had been here in Bucharest with us, recently moved out there to establish a Chabad center, which is very exciting.

All in all, we are three Chabad couples. Two pairs of us are focusing heavily on youth because they are our future, our greatest investment, the guarantors that there will be a Jewish tomorrow.