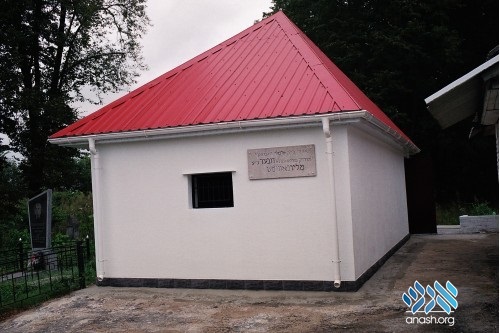 The comments about Rivka Rasya Schneersohn were many. We thank you for them. We chose the best ones to respond to here.

I see on Geni that there is a Leah Schneerson married to Reb Naftoli Halberstam. I assume this is the same person? There are no children listed. In many books it’s mentioned that R’ Naftoli Halberstam was a son in law of Rabbi Nuchem of Niezin the son of Admor Ha’Emtsoi, and  far as I researched, her name was Rivkah. Yes, they had no children. If you look in the text of the Matzeivoh you can understand this. But I have to check the date when she was niftar, because there is a story about his brother Rabbi Moshe from Sieniwa who had to travel very far together with his father the Shiniewer Rov to arrange Chalitza for her, after R’ Naftoli’s petirah on כ”א כסלו תרכ”ד, so we need to be sure she was really niftar after him. Now I’m looking again, I’m sure we need to read her petira [ש'[נת] תר”ז ל[פ”ק and not תרל”ז, because there is a space between the תרז and the ל, also there ia a point on the ל, which means לפ”ק. So it’s sure she could not be the wife of Rabbi Naftoli Halberstam. Do you have any contacts in Niezin to look if there was another daughter of Rabbi Menachem Nochum of Niezin?Also what is the Yahrtzeit of Rabbi Menachem Nochum of Niezin? I didn’t find any date! It must be he was niftar before תר”ז, because the matzeiva says: ותקבר בקבר אבותיה.

I think that Rav Naftali Halberstam’s wife was Leah, daughter of
Menachem Nochum not Rivka Rasi. TY for a great site.

The year she passed away is תר”ז, not תרל”ז. The ל at the end stands for לפ”ק, like the ש stands for שנת. The Mitteler Rebbe married in תקמ”ח. Its unreasonable to say that his granddaughter – daughter of his eldest son – died at a young age 90! years later. It still doesn’t fit perfectly with your other accounts. Why don’t you cite the places and bring the actual accounts?

Thank you very much for all the research that went into this article. It was a little bit hard to follow all the connections between the families and remember all the names. Perhaps next time you could make a family tree to illustrate it? Also I don’t know if you can work out from the faded
Matzeiva the exact year Rivka Rasya passed away. If she passed away at 22 in 5637, it means she was born in 5615 which is 67? years after her
father Menachem Nochum was born in 5548?

We’ll try to address all of the good points that were made by your emails.

The first realization we came to was that assumptions were made in our “deciphering” of the matzeivah. We assumed that the date of Rivka Rasya’s passing was תרז”ל/1877, but that seems to be in doubt. As Mendy Greenberg pointed out, mevinim would explain that just as the ש stands for שנת, the year, the ל in this case stands for לפ”ק = לפרט קטן, which means the smaller count. This refers to the way we usually write 5607 in Hebrew, which is without the preceding ה’.

In other words, the way one would write 5607 in prat koton is תר”ז and not ה’תר”ז, and that is what this additional letter comes to tell us. As far as the years are concerned, it is more reasonable to say that her passing occurred in the year 5607/1847, as opposed to 5637/1877.

Furthermore, there are two opinions as to the date of birth of Reb Menachem Nochum himself. The Frierdiker Rebbe brings in the sicha of Yud Tes Kislev 5693/1932 that his uncle Reb Nochum was born in 5548/1788, which would be the year the Mitteler Rebbe got married. The other opinion, brought in the Igros of the Frierdiker Rebbe, is that he was born in 5558/1798, right after the passing of Reb Nochum of Chernobel for whom he was named.

If we were still to assume that Rivka Rasya was born in 5615/1855 that would mean that the youngest Reb Nochum could have been at the time of his daughter’s birth was 57 years old. While this is not impossible nor unprecedented, it is also not so likely. Furthermore, if we were to accept the first opinion, that he was born ten years earlier, this would be even more unlikely.

If she was indeed 22 years old at the time of her passing in 5637/1877, that would indicate that she was born in the year 5615/1855. This would create an inconsistency with the account that she was the wife of Rav Naftoli Halberstam.

We received comments from those who have said they believe she was born from Reb Menachem Nochum’s zivug rishon, in which case her mother would have been the daughter of Reb Zalman Rivlin. According to one Geni family tree the name of Reb Nochum’s first wife is thought to have been Basya. Sefer Hatzetzaim has her listed as Freida. This would also mean that she was not connected to any Chernobler or Sanzer dynasties.

This would make sense as far as the dates are concerned; as it would mean that Reb Menachem Nochum was still quite young when his wife gave birth to Rivka Rasya. However, that would also mean that her husband couldn’t have been Rav Naftoli Halberstam.

There are several accounts of Rav Naftoli’s father, Rav Yechezkel Halberstam of Shineve, traveling to Russia to perform the mitzvah of chalitzah on the wife of Rav Naftoli. He traveled there with brother-in-law Rav Mordechai Dov (Mottele) Hornosteipler, who was also Rav Menachem Nochum’s great nephew being that the Hornosteipler was a grandson of the Cherkasser, Reb Nochum’s brother-in-law. (The Cherkasser was married to Devorah Leah, the Mitteler Rebbe’s daughter.)

This was seen as evidence that Rav Naftoli was the unknown husband of Rivka Rasya. The wording on the matzeivah makes reference to the fact that she had suffered in life; if she was, indeed, a young widow, this wording would be suitable. However, there are conflicting accounts as to whom Rav Naftoli married.

One report in the sefer “Divrei Yechezkel Hachodosh” shows Rav Naftoli as having married (in a second marriage) the daughter of a Rav Noach Shmaya Schneersohn, son-in-law of Rav Yakov Yisroel of Cherkas. I have yet to find any mention of a Noach Shmaya at all, and definitely not one who married the daughter of the Cherkasser. It would seem that this is a misprint, with the likely correction being Reb Menachem Nochum.

There are seemingly erroneous reports online that indicate that Rav Naftoli married the daughter of Reb Meshulem Zusha, son-in-law of the Cherkasser. These are not corroborated in any source.

Based on all of this, we may assume that Rivka’s mother was Basya, or Freida, the daughter of Reb Zalman Rivlin, and not of Rav Yakov Yisroel of Cherkass. We do not yet know who her husband was, which leaves us to wonder, who was Reb Naftoli’s second wife who needed chalitzah? One expert mentioned that he figures it to be Chana Chisha/Cheika, daughter of Reb Menachem Nochum from his second wife, Sara Frieda, the daughter of his brother-in-law, the Cherkasser. (I know it’s confusing, but it’s all true!)

Chana Chisha/Cheika was born in Cherkass in 5605/1845, which would make her 19 years old when Rav Naftoli Halberstam, for whom this was a zivug sheini, passed away. We can assume this was her first marriage. She had no children from this marriage.

Reb Menachem Nochum had several children with Sara Frieda besides Chana Chisha, including Rav Mordechai Dov of Tomashpol, whose son Reb Moshe lived in Crown Heights during his later years until his passing in 5719/1959. Reb Moshe was a fifth generation ben-achar-ben from the Alter Rebbe.

Rav Yisroel Noach Schneersohn, son of the Tzemach Tzedek, is also buried in Nyezhin, in the Ohel of the Mitteler Rebbe.