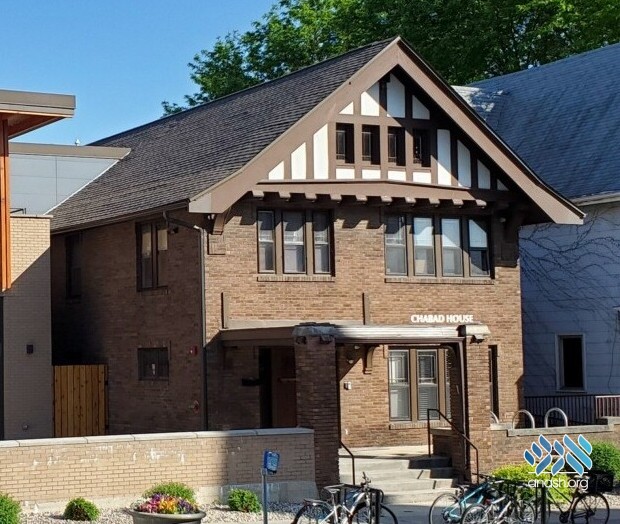 The Rohr Chabad House at University of Wisconsin had a window broken at some point over the last two days, but Shliach Rabbi Mendel Matusof does not believe it was related to antisemitism.

The Rohr Chabad House at University of Wisconsin had a window broken at some point over the last two days, but the director, Rabbi Mendel Matusof, does not believe it was related to antisemitism.

“Thank G-d, it was just a broken window with a rock,” he said. “On our block, we had gas canisters, sheriffs in riot gear.”

The Chabad house is at 223 W. Gilman St., just off State Street in Madison – a major student artery.

After the death of a black man held down by a police officer in Minneapolis last week, the city of Madison has seen two nights of protests and riots with property damage, looting and attacks on police, according to a Wisconsin State Journal report.

Matusof can’t say for sure when the large window, abutting a dining area, was broken. He noticed it today.

“Under normal circumstances, I think it would be a lot more ominous,” said Matusof, who added that windows at other facilities in the area were also broken.

“There’s a lot of real pain. Jewish students and Jewish communities are participating and should be participating in trying to rectify injustices,” he said.

Peaceful demonstrations are a better way, according to the rabbi. Political activism, educating friends and colleagues, “that’s the Jewish way,” he said.

In general, students and professionals in Madison have told the Chronicle that while there have been some isolated antisemitic incidents on campus, the atmosphere is good, and Madison is no worse than other campuses nationwide.

“The atmosphere is very safe and very safe for Jewish students,” Matusof said.

He did say current events are weighing on students, as they weigh on everybody. The students, generally around 20 years old, have never seen riots like this, he said. Plus, there’s a global pandemic.

“Many of the things we do during the school year we just continued,” he said. “Students are like: ‘Why not? We’re not doing anything anyway.’”