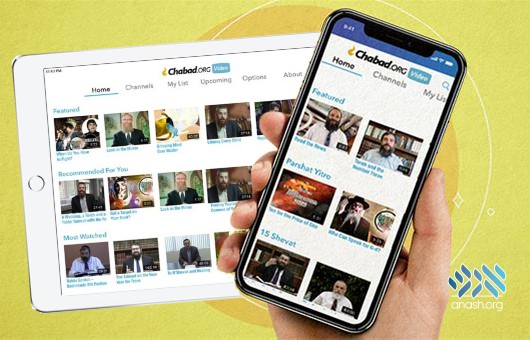 From Itche Kadoozy to advanced cooking, from a gemara shiur to live Zoom classes, Chabad.org’s 23,174 (and counting) videos are now more accessible than ever with the all new Chabad.org Video site

By Mordechai Lightstone for Chabad.org

When her children’s school was closed in Peoria, Ill., in light of the coronavirus pandemic, Jenny Kravetz, like so many parents around the world, was plunged headfirst into the new world of online education.

Her two children, ages 11 and 14, started attending public-school classes via Zoom, but she also wanted to supplement their general education with their equally vital Jewish one.

That’s when she discovered the newly revamped Chabad.org Video. In the weeks before Passover, she and her children were able to log on and watch a series of entertaining and educational holiday videos, on everything from Itche Kadoozy to advanced holiday cooking techniques.

“Our kids attend public school, so we are always looking for ways to supplement their Jewish education in a different way, a more exciting way other than just having mom and dad teaching,” says Kravetz, who first heard about Chabad.org Video from Sarah Langsam, co-director, with her husband Rabbi Eli, of Lubavitch Chabad of Peoria, a small city 160 miles southwest of Chicago.

The ability to do this online has become all the more important during the era of coronavirus, and so for Kravetz and tens of thousands like her, Chabad.org Video has become a lifeline for Jewish education and daily Torah study.

Indeed, since the middle of March, when much of the United States and large swaths of the globe began implementing stay-at-home orders, the world’s largest Jewish video site has seen a surge of visitors. While kids’ and cooking videos have gained in popularity, so have many daily Torah classes for adults.

The heavy increase in demand and traffic comes just as Chabad.org Video rolled out a modern, fresh interface designed to help viewers more easily explore its content. A new video app for Apple and Android devices has also been released, as has a kids’ video app.

The site now boasts larger video previews and a focus on curated channels, including short insights, editor’s picks and a new algorithmic “Recommended for You” section, making it simpler to traverse the site’s 23,174 videos and counting. Hebrew and Russian versions of the new video site are also now accessible with more languages on the way.

Vast Trove of Videos of the Rebbe

Even more so, the video site serves as a critical point of access to the vast trove of recorded talks and gatherings with the Rebbe, Rabbi Menachem M. Schneerson, of righteous memory. Over the course of 42 years, the Rebbe’s primary medium of teaching was the farbrengen, Chassidic gatherings held regularly in the synagogue at 770 Eastern Parkway in Brooklyn, N.Y. While many of these gatherings took place on Shabbat or Jewish holidays, when recording is not allowed according to Jewish law, many hours of farbrengens or other talks were recorded during weekdays. These videos, made available in partnership with Jewish Educational Media (JEM), allow hundreds of thousands of visitors each year to directly experience the Rebbe’s teachings, offering a direct, unmediated, look at his vast wisdom and lasting inspiration.

Throughout his lifetime the Rebbe also interacted directly with countless individuals from all walks of life, Jew and non-Jew, rabbis and laymen, generals and statesmen, authors and artists, whether in private audiences, his famous “dollars” line or by mail. And so alongside farbrengen footage, Chabad.org Video also features hundreds of moving interviews that are a part of JEM’s “My Encounter with the Rebbe” oral history project.

Included in the redesign is Chabad.org courses, which has run some 25 interactive video courses, attracting close to 70,000 enrolled students to date and covering an eclectic selection of topics from “Food and Faith” to “Eden Decoded.” Among the site’s most popular recent videos has been the first installment of the newest course offering, “Your Path to Purpose,” the first session of which aired on April 30.

Thousands of Torah Study Videos for Adults at All Levels

This impetus for using video stems from the Rebbe’s visionary approach to harnessing the positive potential of technology. More than viewing technological innovation as merely a means to transmit the Torah, the Rebbe viewed the act of harnessing technology for spreading the “wellsprings” of Judaism as a means of revealing the very purpose for which the technology was created. Quoting the dictum of the sages that “All that G‑d created was created for His honor,” the Rebbe articulated that “all the scientific discoveries of recent years—their purpose is to add honor to G‑d by using them for holiness, Torah and mitzvot ….”

Beginning in September of 1980, satellite technology was used to broadcast the Rebbe’s weekday talks around the world. By the end of the decade Chanukah Live was initiated, an interactive broadcast that united simultaneous mass celebrations held in Jewish communities around the world, in real time.

Utilizing video has long been a key part of Chabad.org’s mission to use technology to unite Jews, empower them with knowledge and foster a deeper connection to their heritage. Rudimentary video was featured in some of Chabad.org’s earliest iterations long before streaming video was standard on the web, and video from Jewish programs was streamed live on the site as early as 1997.

Today, the site offers a plethora of videos to explore, from an in-depth Talmud-study class streamed daily with Rabbi Avraham Zajac to weekly thoughts on the Torah portion from Chana Weisberg to lectures from noted academics at Chabad of Oxford. Rabbi Mendel Kaplan’s scholarly discourses, including the recent “Yizkor in the Age of COVID-19,” and Michael Chighel’s innovative and genre-bending classes have, each in their own way, brought Jewish lessons to countless individuals. The late Rabbi Yehoshua “Josh” Gordon’s daily classes have become an essential part of many thousands of people’s day-to-day Torah study routine, and the beloved rabbi’s dedicated base of hardcore students and fans continues to grow even four years after his passing.

“People have different modalities of learning,” says Rabbi Shmuel Lifshitz, editor of Chabad.org Video. “The site allows people to better explore the many classes, lectures and short films we offer and find something that speaks to them.”

One regular is Robert Staub, a semi-retired stock trader who splits his time between sunny Southeast Florida and Hawaii’s Big Island, who uses Chabad.org Video to start his day with a Torah class.

Staub explains that while in South Florida the distance from the Jewish Community Center and synagogues is measured “in blocks not miles,” he began his Jewish education journey in a remote part of Hawaii, where that was once impossible.

“When I moved to the Big Island, I was seeking to restart my Jewish education,” he says. “Chabad.org offered me the smorgasbord of educational content I craved for. It was also available on demand, which helped with the large-time difference with the mainland.”

Staub continues to study with his online teachers, the video classes of Rabbi Gordon, Michael Chigel and Rabbi Berel Bell rounding out his daily regimen.

He especially looks forward to encountering the surprises of Chigel’s latest creations, saying “they inspire the desire for a deeper understanding while leaving a smile on my face.”

Similar to Staub, Leah Miller’s hometown of Alexandria, La., is far from being a center for Jewish life. For Miller, however, accessibility to Jewish learning is not only limited by the current pandemic or distance: The VA rehabilitation specialist is also Deaf.

“I started using Chabad.org about a year ago, when I was looking for Jewish resources accessible to my needs,” says Miller.

“I’ve turned to Chabad.org Video for resources such as the daily parshah and Daf Yomi,” says Miller. “I was not able to learn Hebrew or join a religious-school class because I could not hear when I was growing up. So now with technology and with Chabad.org, I am trying to catch up and make up for lost time.”

The myriad experiences of Chabad.org Videos’ many viewers was “exactly what we had in mind,” says Rabbi Yaakov Kaplan, who helped lead the redesign. “We wanted to make it even easier for users to find the video that speaks to them and enable them to take part in an inclusive learning experience online.”

At a time when nearly everyone finds themselves to be isolated from family, friends and community, it couldn’t have come sooner.