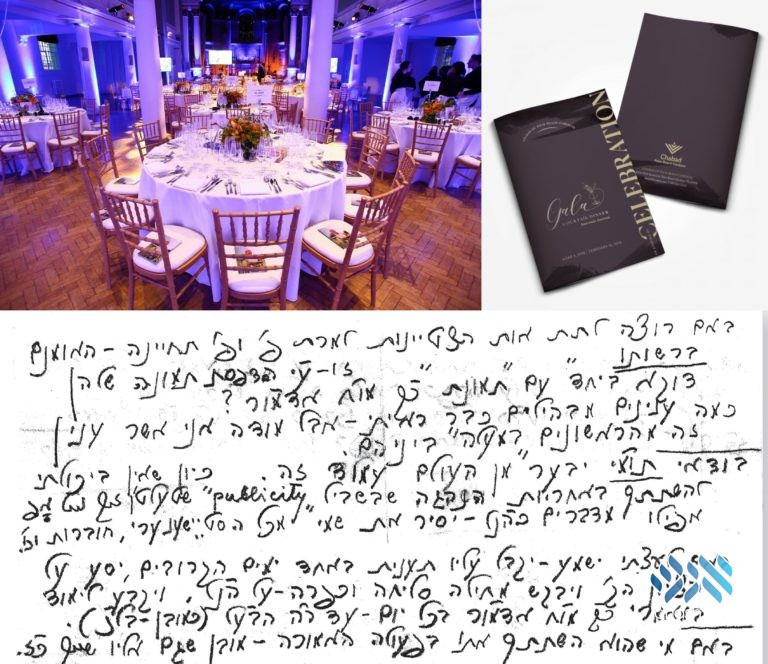 A Note from the Rebbe: When a shliach’s dinner journal featured something shocking, the Rebbe suggested an appropriate tikun.

In response to a dinner journal that recognized several (female) supporters of a mosed by printing their pictures alongside a picture of the Frierdiker Rebbe, the Rebbe wrote:

Does the fact that they want to give a recognition award to Mrs. … and Mrs. …  give them the right to give that recognition by printing their pictures together with a picture of the Frierdiker Rebbe?

I have seen many shocking things, but I must say that this is one of the most shocking.”

This page will certainly immediately be destroyed. Also, because I cannot take responsibility, given that for the sake of publicity they do not avoid even the above-mentioned, my name should be removed from all stationary, pamphlets etc…

My advice is that you should, in the coming days, fast and go to the Ohel of the Frierdiker Rebbe to ask for forgiveness. You should also commit to learn the ma’amorim of the Rebbe every day until Rosh Hashana (obviously bli neder).

If there was anyone else that was involved in this action, all of the above applies to them as well.