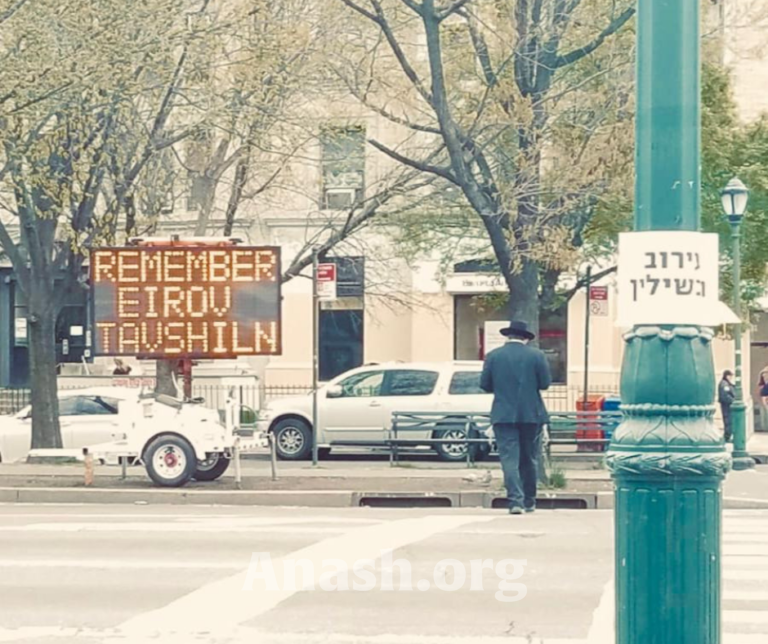 With Shabbos following YomTov there is a need to make an Eruv Tavshilin, so that we may cook on Friday Shvi’i Shel Pesach for Shabbos. Attached are pertinent halachos for the Eruv, compiled by Rabbi Shmuel Lesches of Melbourne.

If necessary, one may appoint a Shliach to set aside (the Meshaleach’s) food and perform an Eruv with it. The Shliach performs the Eruv with a Brocho. If the head of the household is not home for Yom Tov, one of the other family members should do Eruv Tavshilin instead. [The head of the household may not rely on this Eruv Tavshilin, being that he is not spending Yom Tov at home.]

If one will be eating all of his Shabbos meals elsewhere, but will be sleeping in his own dwelling, he will need to light his own Shabbos candles. To this end, he should perform Eruv Tavshilin without a Brocho. However, it is preferable to plan on preparing even a minor food item on Friday for Shabbos, such as adding water to the hot-water urn, in order that the Eruv Tavshilin be made with a Brocho.

If one is running late, and making an Eruv Tavshilin will prevent him from davening Mincha until it is too late, Mincha takes precedence. If one forgot Eruv Tavshilin until after the emergence of three stars, he should consult with a Rov, as the solution depends on the circumstances.

The cooked item should be a respectable food (e.g. fish or meat). It may either be fully cooked, roasted, smoked or stewed. It may also be a non-cooked item that was pickled for at least 24 hours. The cooked item must equal a Kezayis or more, excluding the bones or other inedible parts. [A Kezayis is a measurement of volume. For the purposes of Eruv we are lenient, and rely on the opinions who define it as the displacement of 18 millilitres of water.

In practice, anything less dense than water weighing 18 grams is most certainly more than a Kezayis.] The cooked item must be the type of food that is commonly served as a main dish during a meal, to the exclusion of desserts or compote, and the like. If one uses a hard-boiled egg, it should not be peeled until it is ready to be eaten on Shabbos. [If one peeled it on Yom Tov, he may still rely on it for Eruv Tavshilin.] One may freeze the Eruv Tavshilin at any time, as it is still inherently edible.

The first step of Eruv Tavshilin is to give the item to someone else, so that he can be Zoiche (acquire) it on behalf of anyone outside of the household who may need to participate. One should not use the services of his wife or unmarried children for this task, unless there is no other alternative. The one making the Eruv Tavshilin hands the food over to the Zoiche and says:

If he doesn’t understand the Hebrew, he should say it in English. [I hereby grant a share in this eruv to anyone who wishes to participate in it and to depend on it.]

One must understand the text of Eruv Tavshilin declaration. If he doesn’t understand the Hebrew, he should say it in English. [Through this (eruv) it shall be permissible for us to bake, cook, put away a dish (to preserve its heat), kindle a light, prepare, and do on the holiday all that is necessary for Shabbos – for us and for all the Israelites who dwell in this city.] Care should be taken to say the recitation as stated, as certain changes invalidate it. Afterwards, the Eruv Tavshilin is put in a place where it will be safe until Shabbos.

 ON YOM TOV AND SHABBOS

One may prepare for Shabbos on Friday as long as at least a Kezayis of the cooked Eruv Tavshilin item remains edible and accessible. If this is not the case, then one should discuss his options with a Rov (even if the baked item remains). In any case, one may complete all the stages of preparation for food that one already began preparing whilst the Eruv Tavshilin was present. On Friday, preparing for Shabbos is only allowed if there is still enough time for guests to theoretically arrive and partake of what was prepared before Shabbos begins. Therefore, the Cholent should be fully cooked some time before Shabbos.

The Eruv Tavshilin is effective only for preparations involving food and food utensils, or other meal-related matters such as lighting candles. Therefore, one may bring Matzah and wine to Shule for the Seudas Moshiach. However, the Eruv is not effective for non-meal preparations such as rolling the Sefer Torah or performing an Eruv Chatzeiros or Eruv Techumin.

One may theoretically eat the Eruv Tavshilin once the Shabbos preparations are complete. However, it is preferable not to eat it until Shabbos. It is customary to use the Matzah of the Eruv Tavshilin as part of the Lechem Mishnah of both the night and day meals.