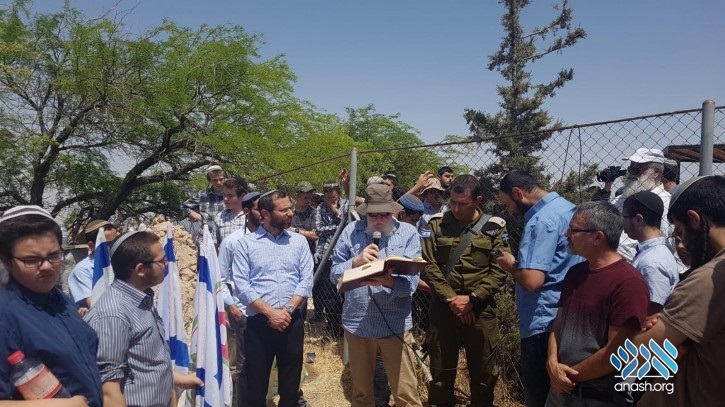 Hundreds of Israelis on Tuesday participated in an uncommon funeral in which the human remains of Jews from the Bayis sheini Era were brought for burial at Kfar Adumim, south of Yerushalayim.

The remains were found in April when Israelis on a hike in the Jericho area came upon a gruesome scene:  an ancient Jewish burial tomb that had been exposed by local Arabs in the course of construction work had been looted, and human remains were scattered throughout the area.

The ancient burial caves on the outskirts of Jericho date back to the Bayis Sheini era, part of the extensive burial grounds of the Chashmonean palace uncovered at the site. The cave was recently exposed in the course of landscaping work carried out by Arab farmers, who bulldozed the site to prepare the ground for agricultural work.

The hikers, who visited the site over the weekend, were appalled by what they found. Human remains were strewn everywhere on the freshly-tilled ground, the catacombs were thoroughly ransacked and looted, and the sarcophagi that had been resting in the caves for over 2,500 years had disappeared.

The Regavim organization filed a complaint with the IDF’s Civil Administration, which sent a team from its Archaeology Unit to collect the scattered, desecrated remains, which were reinterred today.

The burial ceremony, attended by rabbinic leaders, senior Civil Administration officials, and other public figures, took place at a specially designated area in the Kfar Adumim cemetery as the final resting place for the ancient remains.

‘Final Resting Place Among the Newly-Reborn Jewish Community’
Yisrael Gantz, Head of the Binyamin Regional Council, in his eulogy, said that “we are here because greedy, callous thieves, who have no respect for human dignity, laid their hands on the remains of our ancestors. We stand here today, ashamed, as we are forced to say to them: ‘We have failed you. We failed to protect you as we should have.”

“Nonetheless, we, your children’s children, are here today to pay our last respects, and to bring you to your final resting place among the newly-reborn Jewish community of the Binyamin region, in the heart of our homeland,” he continued. “We are certain that you take pride in this fitting burial place. Alongside our sadness, we are proud that you will dwell among us for eternity, and in the coming days we will erect a proper memorial stone on this fresh grave.”