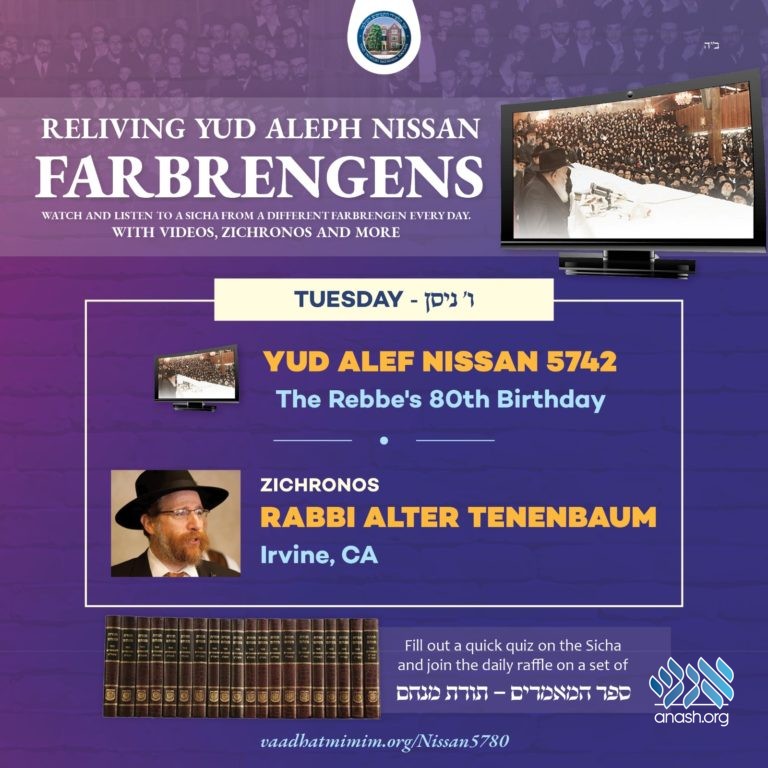 On Yud Alef Nissan 5742 the Rebbe held a special farbrengen for his 80th birthday, and distributed a priceless gift to all who attended. Watch the farbrengen and relive those special moments with zichronos by Rabbi Alter Tenenbaum.

As reported on Anash.org, Vaad Talmidei HaTemimim has launched a campaign for bochurim to relive historic Yud Alef Nissan farbrengens by hearing the farbrengen and personal memories.

Today’s feature is the farbrengen of Yud Alef Nissan 5742, The Rebbe’s 80th Birthday, Sicha Gimmel and Hey, along with the Hanacha in English, Hebrew and Yiddish along with Summaries of the Sichos.

Zichronos from that Farbrengen told by Rabbi Alter Tenenbaum, Shliach in Irvine, California.

Fill out the quick quiz on the Sicha and enter into today’s raffle on a set of ספר המאמרים – תורת מנחם.  Deadline: Wednesday, 7 Nissan, 6:00PM.