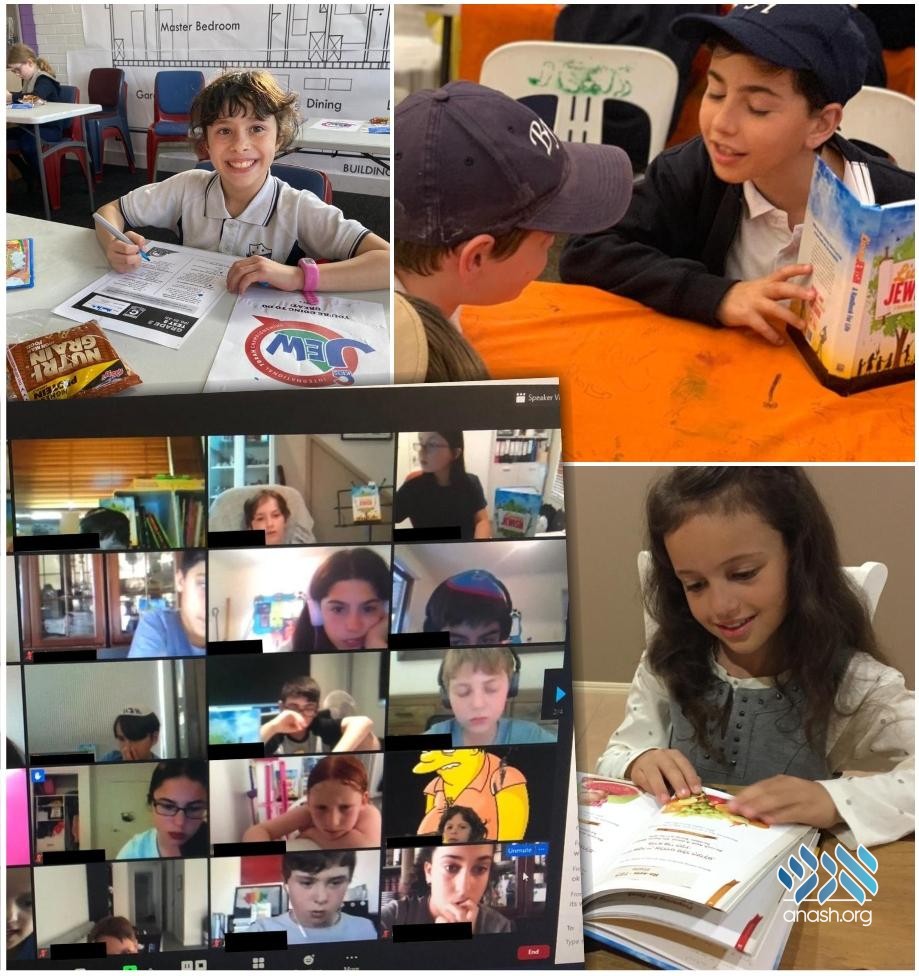 As hundreds of kids from over a dozen cities across Australia are preparing for the Australian JewQ finale, they were thrilled to find out, that thanks to relaxing COVID restrictions, all finalists would be traveling on a local grand trip.

On the other side of the globe, off the sparkling shores of the Pacific ocean, Australia’s JewQ competition comes to a close. What started as an adaptation of the global JewQ competition, designed to accommodate its unique school schedule, turned into a full-fledged program with hundreds of kids over a dozen cities across the continent.

Students absorbed the fundamentals of Jewish life, studying from assigned chapters of the Living Jewish textbook. Three tests were given periodically along with a final test covering all material. Each grade focused on a different topic, ranging from the Jewish calendar to Jewish heroes. But what all students—and parents—had in common was an appreciation for the knowledge gained.

“Gabriella had been immersed in the history of the Jews,” says parent Helen Taylor, who sends her daughter to Chabad North Queensland in Cairns & Townsville, QLD. “We are really grateful for JewQ.”

A grand total of 110 kids earned test scores that landed them a place in the finals. “It makes me so happy to achieve something I’ve worked so hard for,” says 5th grader Chloe Auslender. Jamie Lobel, who attends Lamdeni of Melbourne, doubted her abilities at first but says, “Once I saw my score, it was confidence boosting. I am really proud of myself.”

The championship event, a virtual experience featuring recorded video sections, will honor the hard work of all the JewQ participants just in time for summer vacation, which starts next month. “We are proud of every child who participated,” says Rabbi Zalmy Loewenthal, CKids director. The finale will recognize the children and showcase their achievements in a game show competition, with the grand prize winner taking home a cash prize of $1018.

One of the biggest advantages to this year’s program was how it united Australia. “Some cities only had one or two children join, but it still made a huge impact,” says Leah Greenbaum, director of JAE in Moorabbin, VIC.

Planning a Torah championship during a global pandemic has not been easy. “It was a venture into virtual classes, online tests, and shipping challenges,” says Rabbi Mendel Raskin, JewQ Director. Catching all the curveballs that Corona has thrown at the championship’s structure has “kept us on our toes,” he admits. “We were forced into creativity and resourcefulness, always thinking outside the box.”

The real secret to JewQ’s success though? The unity of shluchim from all over. “Everyone pitched in wherever they were most skilled,” says Rabbi Bentzi Deray, director of JEMs in Bondi, NSW. Although they received a constant stream of help from CKids headquarters, Australia’s shluchim took the lead to execute on the JewQ resources “We supported each other and took responsibility to make it happen.”

Thankfully, Covid restrictions have relaxed recently, and finalists will be treated to local grand trips after watching Sunday’s grand finale. It’s the culmination of a program that keeps parents and kids coming back for more. Parent Shai Jackson of Gold Coast Hebrew Congregation says she knows her son Noah “wants to join again next year.”

While the world has been turned over by the chaos of Covid, JewQ has been an oasis of Torah learning. “CKids is on the forefront of spreading Torah throughout the globe—literally,” says Rabbi Moshe Kotlarsky, vice chairman of Merkos L’inyonei Chinuch. “Every Jewish neshama that’s affected is priceless.”

Visit Ckids.net.au/live this Sunday, November 29th, at 6PM AEDT to watch the JewQ finale, a celebration of Torah and Jewish children.

Thank you to JewQ Australia’s talented team of Shluchim who made the program such a success: