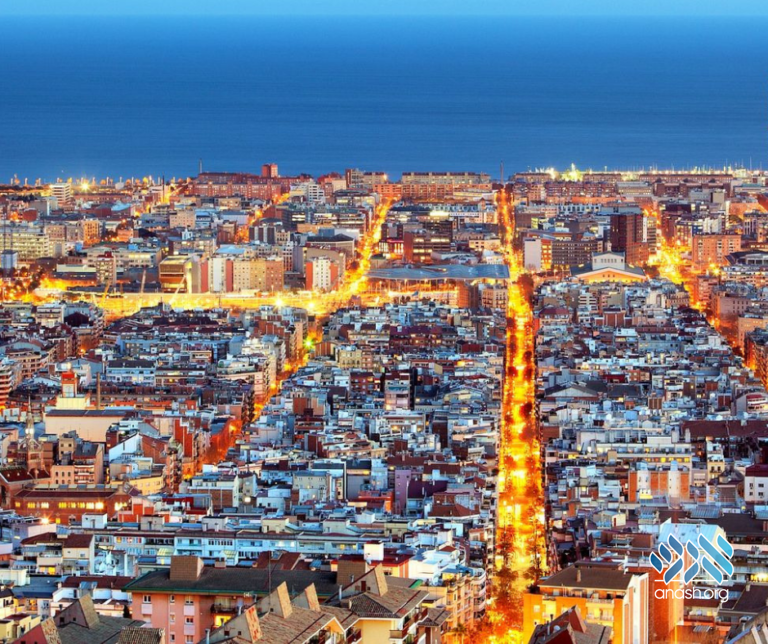 Chabad Shlucha Nechama Libersohn talks about the challenges of Kosher food, Chinuch, the new Chabad house, and the return of Judaism to Spain After 500 Years of darkness.

With its charming stone alleyways and stunning ocean views, Barcelona is one of Europe’s most visited cities. Tourists pour in to enjoy the sunshine, sports, and stunning architecture. Yet the city’s ancient archways bear silent testimony to more than 1,000 years of rich Jewish life, snuffed out by the Spanish Inquisition and the Expulsion in 1492.

Since 1999, Rabbi Dovid and Nechama Libersohn have directed Chabad activities in the city. In an interview with Chabad.org, Mrs. Libersohn shares how she, her community and her family have grown in these past two decades.

Q: You are from France, and your husband is from Mexico City. How did you end up in Barcelona?

A: It began before my husband and I even met. He traveled through Spain for two summers as part of Chabad’s Merkos Shlichus Roving Rabbis program. Together with Rabbi Avrohom Lapidus, now of Yeshivas Toras Emes in Jerusalem, he visited many cities, including Barcelona, where he made many connections. He even returned one year to run a camp during winter vacation for Jewish children.

After we married in 1998, we settled in the Crown Heights neighborhood of Brooklyn, N.Y., where my husband continued his rabbinical studies.

One day, he picked up a Spanish-language newspaper and saw an ad for a Jewish teacher in Barcelona. He called the number and discovered that the person on the line was someone he knew from his visits.

That was 20 years ago, and we’ve been here ever since.

Q: What was it like for you? Was it difficult to adjust?

A: When I look back to how it was when we first began, I am so filled with gratitude to G‑d for how far our community has advanced. When we came, there was no kosher meat, no kosher dairy—nothing. Today, thank G‑d, there is a wonderful restaurant and high-quality kosher catering, both under my husband’s supervision.

Before we left, we were visited by the late Rabbi Binyomin Klein and his wife, Leah. Rabbi Klein told us always to remember that the Rebbe was going with us, and that’s something I’ve truly felt here. We experience miracles all the time. Things grow and develop in ways we could not have ever imagined.

Mrs. Leah Klein, a dear friend, gave me a bread machine. She told me that I would be living in a place with no pas Yisrael food items to buy, and this would allow us to have fresh bread every day. She was so right, but I could not even imagine at that time what it meant that we were moving for the rest of our lives.

We arrived a little more than two months before Purim, and we prepared 15 mishloach manot packages to distribute. Someone called to thank us for the gift and ask why we gave it to her. She, like so many others, had no idea how Purim is celebrated. Today, I am glad to say that dozens of people give us mishloach manot every year, many taking care to pack them with Israeli products and other foods they know to be kosher. We’ve really come a long way as a community! We see the Rebbe’s blessings every single day.

I also had to adjust to the Spanish language. Many people here don’t really know anything other than Spanish or Catalan, so I had no choice but to pick it up.

A: Of course, there are no Jews here with very deep roots in the community since practicing Jews were banned from living here from 1492, and Jewish life wasn’t officially allowed to resume here until 1968.

We believe that there are at least 4,000 Jews living here, mostly immigrants from Morocco and Argentina. We know many of them, but there are still more we have yet to meet.

At our Pesach Seder, we host 800 guests, and we have many hundreds at High Holidays and other events at our Chabad House.

When we came, there weren’t even three families keeping kosher. All the events we were invited to, bar mitzvahs, weddings, etc., were non-kosher. Today, 90 percent of them are kosher, thank G‑d (many of them supervised by my husband). Today, some of the most religious families have relocated to cities with better Jewish education, so there has been a lot of progress on that count.

Two years ago, we inaugurated our new Chabad House, which we thought would have ample room for everything we do. Thank G‑d, we’ve already outgrown it.

Q: What makes your work different from that of the thousands of Chabad emissaries around the globe?

A: In many ways, it is very similar to what our colleagues are doing. We teach Torah, run programs, help people through the cycle of life. One thing that is different here are the waves of Jewish tourists.

When we moved, there was one direct flight to Israel every week. Now, there are five flights a day.

Just yesterday, we hosted 40 Israeli tourists for breakfast, and that’s an ordinary occurrence here. One of the women opened up her wallet and showed me a dollar she received from the Rebbe. She has carried it with her for the past 30 years.

Tourists take a lot of work, and sometimes they require a lot of patience, but I am reminded over and over again that everyone is special, and everyone has a story.

Q: Barcelona is famous for its Jewish history. Great Jewish leaders like the Ramban and the Rashba lived there, and then there were the dark days of the Inquisition. Is that felt in the city?

A: The truth is, you need to dig deep to find the city’s Jewish past. It’s there, but it’s not obvious as it is in other cities.

For this reason, it’s especially poignant to see Jewish life blossom in the very same place where Judaism was so brutally snuffed out. When we first arrived, I remember seeing the Spanish names on the mailboxes. They were the same family names I knew from the Jewish historical novels I read as a child. I asked the neighbors if they knew anything about the city’s Jewish history and its tragic end, and they said they didn’t. It was painful to see how Jewish history had been erased from the city.

Every year, we hold a large Chanukah menorah-lighting in El Calle, the historic Jewish quarter. Jews were once burned at the stake here for clinging to Judaism; today, we celebrate Judaism on those very same streets. That touches me very deeply.

My husband does a lot of work with the youth, our future. Sunday school, winter “camp,” programs and trips are just some of the ways we educate the next generation.

As we speak, he is in Poland leading a group of 35 local Jewish teens who have just graduated high school on an 11-day tour that will continue in Israel. Many of them have been in our Sunday Hebrew school from age 4 until adolescence, and he makes sure to keep them involved and inspired.

A: They hardly have friends of their age in the city. But for them, this is the only life they’ve ever known. The kids are an integral part of what we do. They help with our programs, attend events and really take responsibility for the success of Chabad and the community here. As difficult as it may be in some ways, their childhood is very special, and I hope they will treasure it when they grow up.

I have the utmost appreciation for the Nigri International Online Shluchim School, which has given our children a stellar Jewish education right here in Barcelona. We speak Hebrew at home, the language of instruction in the European division of the school. Through the school, the kids have developed friendships with children of Chabad emissaries all over Europe. The kids “live” on the computer, where they chat with their school friends. They socialize, sing together, dance together and just have fun as if they were in the same room. Thank G‑d for technology!

For every child’s bar or bat mitzvah, we surprise them by flying in a school friend—a friend they know so well but have never seen in person. The most recent time, our daughter was speechless when her friend surprised her at the door. I just stood and cried.

Once they reach high school, the children go to Israel. Our oldest has been away from home now for six years. For me, this is the most difficult part, having to part from my children. I take comfort in the Rebbe’s assurance that he personally took responsibility for the children of shluchim.

Q: What are your expectations for the future?

A: When we first came, I remember someone told me that we would not last a year. That was 20 years ago. We now direct a lively and beautiful Chabad center. We recently broke ground for a new mikvah. People used to tell my husband not to wear his black hat in public since they were afraid for his safety. Today, there are rabbinical students working with us, and no one thinks twice. Our boys have walked in Barcelona’s streets with a yarmulke and tzitzit from the youngest age.

We’ve become a natural part of the cityscape. When we came, the only shluchim here were Rabbi Yitzchok and Shifra Goldstein in Madrid. Now, we are also blessed to have fellow Chabad couples operating centers in Valencia, Ibiza, Girona, and Marbella.

With G‑d’s help, we will continue to grow and mature as a community in the years ahead.