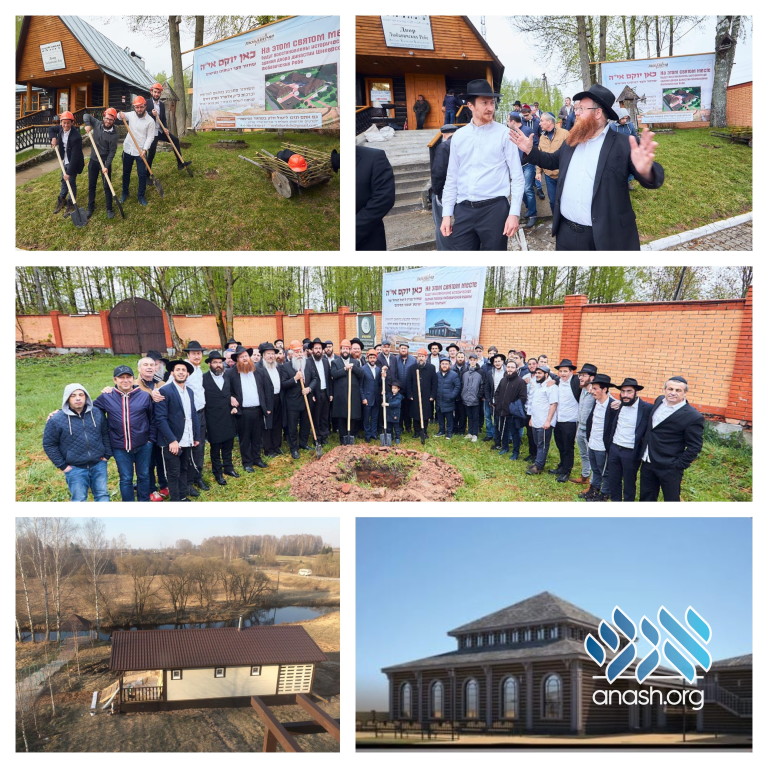 Beis Iyar – 185 years since the birth of Rebbe Maharash – saw the groundbreaking ceremony for the rebuilding of “der groiser zal,” the large yeshiva study hall in Lubavitch. The guests of honor were bochurim from Tomchei Tmimim in Petersburg and Moscow.

Rabbi Gavriel Gordon, shliach to the town of Lubavitch, who cares for the ohel and the visitors, has been active in recent years in the cradle of Chassidus Chabad. Accommodations for visitors have been arranged and new buildings have been going up in the once sleepy town. The Governor of the Smolensk region, where Lubavitch is situated, has been actively and enthusiastically following the developments there, hoping that Lubavitch will one day return to its days of glory.

Not many people know this, but according to Rabbi Gordon the Rebbe told Rabbi Nosson Gurary, shliach in Buffalo, clear horo’os and brochos to buy the houses of the Rabbeyim in Lubavitch. Rabbi Gordon is in constant contact with Rabbi Gurary concerning all issues in Lubavitch. Until recently this project could not be carried out due to local government buildings being on the property. In recent years those were purchased and the area cleared, so that now the construction can begin.

For some time now Rabbi Gordon has been actively searching for some of the kevarim that were destroyed by the Nazis. There was also a cemetery mentioned in the Frierdiker Rebbe’s memoirs that was called “The Cemetery of the Hidden Tzaddikim” – as Lubavitch was a town of many hidden tzaddikim before the Baal Shem Tov was revealed.

Recent discoveries of matzeivos and kevarim include Reb Yissochor Dov, the famous maggid of Lubavitch and the Alter Rebbe’s teacher. Rabbonim from Eretz Yisroel visited a few years to resolve Halachic difficulties related to the discovery of the kevarim.