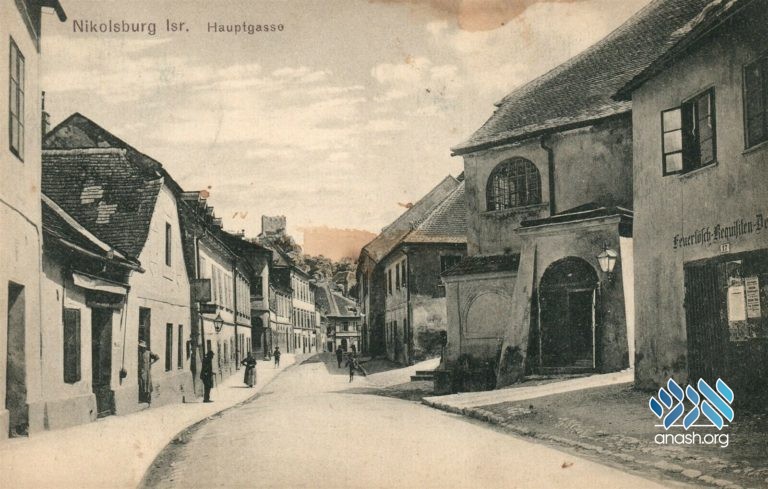 Stepping inside the Jewish quarter of Nikolsburg (today Mikulov, Czech Republic), Rabbi Shmelke Horowitz caught sight of the young men loitering near the entrance. Their faces were clean-shaven, adorned by stylish spectacles, and they held thin canes. A style, he thought despondently, inspired by gentile fashion. Trying to counter the waves of modernity sweeping in from the West seemed futile. Had his rabbi, the Maggid of Mezeritch, not insisted he accept the Nikolsburg rabbinical position, he would’ve turned on his heel and returned home immediately.

Instead, he approached the young men, extended his hand in greeting, and chided them for abandoning Jewish tradition.

“Usually,” he began, “when a person ages—developing white hair, failing eyesight, and difficulty walking unassisted—he realizes his end in this world is near and is inspired to repent. Seeing this, the Yetzer Hara, the evil inclination, introduced a new idea. ‘Already in their youth, I’ll have them shave, walk around with a cane, and wear glasses. This way, as they near death, they’ll remain impassive, never feeling compelled to repent, allowing me to effortlessly guide them to their miserable end.’”

Rabbi Shmelke’s rebuke was seen as an invitation to war.

Life for the rabbi became unbearable. The “enlightened” Jews employed every strain of power they had. To oust the rabbi, some of the town’s most distinguished community members hinted that perhaps he was wrongly suited for a city as “modern and developed” as Nikolsburg. Their words cut Rabbi Shmelke deeper than any of the attempts to ruin his life.

Hundreds of miles to the west, deep in the Polish heartland, Rabbi Elimelech of Lizhensk was hurrying to the mikvah when a voice stopped him mid-step.

“The man who endeavors to save Rabbi Shmelke from his tormentors in Nikolsburg will merit the World to Come!”

Rabbi Elimelech turned to the man escorting him. “Did you hear that?”

The man answered with a shake of his head.

Rabbi Elimelech repeated his question to a passerby, who only looked at him blankly. After asking multiple people about the voice and receiving the same negative answer, Rabbi Elimelech became convinced the voice was directed at him. Not hesitating for a moment, he flagged over the first wagon he saw and ordered a ride to Nikolsburg, a distance of several hundred miles.

Upon arrival, Rabbi Elimelech approached Rabbi Shmelke and requested his permission to assemble the townspeople for a sermon in the synagogue. “This disrespect has to cease immediately.”

“Perhaps take it slowly?” suggested Rabbi Shmelke warily. “This here isn’t Lizhensk. The people in Nikolsburg aren’t receptive to some things, and those things are better left unsaid. I say this only for your own good.”

But Rabbi Elimelech insisted. Word of the famous visitor spread throughout town, and at the appointed hour, a crowd—including many of Rabbi Shmelke’s opponents—poured into the synagogue, filling the chamber from wall to wall. Surprisingly, Rabbi Shmelke’s seat was empty.

To everyone’s bewilderment, Rabbi Elimelech spoke as though he sympathized with the opponents of the rabbis. He spun arguments for more leniency and less rabbinic involvement, mesmerizing all those present. Not one objected, even after he finally fell silent.

“Due to time constraints,” Rabbi Elimelech announced, “I’m unable to complete what I originally planned to say. And so, I would like to invite everyone back tomorrow.”

Nikolsburg was still aflame the next day from Rabbi Elimelech’s speech. The crowd in the synagogue swelled beyond capacity, forcing many to crowd outside the doorway. From the podium, Rabbi Elimelech looked around and noticed with satisfaction that all the men, women, and children of the town were waiting eagerly in their seats. He had achieved the first stage of his plan.

He picked up where he had left off, only this time he refuted yesterday’s words. Gracefully paired with persuasive proof, Rabbi Elimelech explained that all institutions of our Sages are infallible and mustn’t be altered in the slightest; those who defy their words are wicked and their end will be bitter. Rabbi Elimelech continued to rebut everything he had said previously.

Sighs from the crowd, sporadic at first and becoming more frequent with the passing minutes, began to accompany his words. As Rabbi Elimelech persisted in his gentle rebuke, those sighs transitioned into sniffling whimpers and eventually sobs. Not a dry eye remained. The Jewish community of Nikolsburg was churning in the turmoil of repentance.

When he felt confident the crowd in the synagogue realized the enormity of their errors, Rabbi Elimelech described the gift from Heaven that was Rabbi Shmelke Horowitz. They had merited such a righteous man, and all they did was try to chase him away.

Rabbi Elimelech finished speaking, and a solemn silence followed his words. Without a word, the entire crowd rose, lined up, and began shuffling toward Rabbi Shmelke’s home to apologize—some for the way they treated him, others for failing to defend his honor.

Rabbi Shmelke was in his room when he noticed the large crowd heading his way, and he feared the worst. “What has Rabbi Elimelech done to provoke the ire of the entire community?” he wondered in fright. “Now they will be out for blood! What have I done?!”

The door opened, and the heads of Nikolsburg’s Jewish community walked in, their heads bowed in shame.

“We have come to ask for forgiveness,” said one of them in an undertone, too ashamed to look Rabbi Shmelke in the eye. “Our treatment has been inexcusable. We promise that we will change our ways for good, and this will not happen ever again.”

After an emotional farewell from a most grateful Rabbi Shmelke, Rabbi Elimelech departed back to Lizhensk.