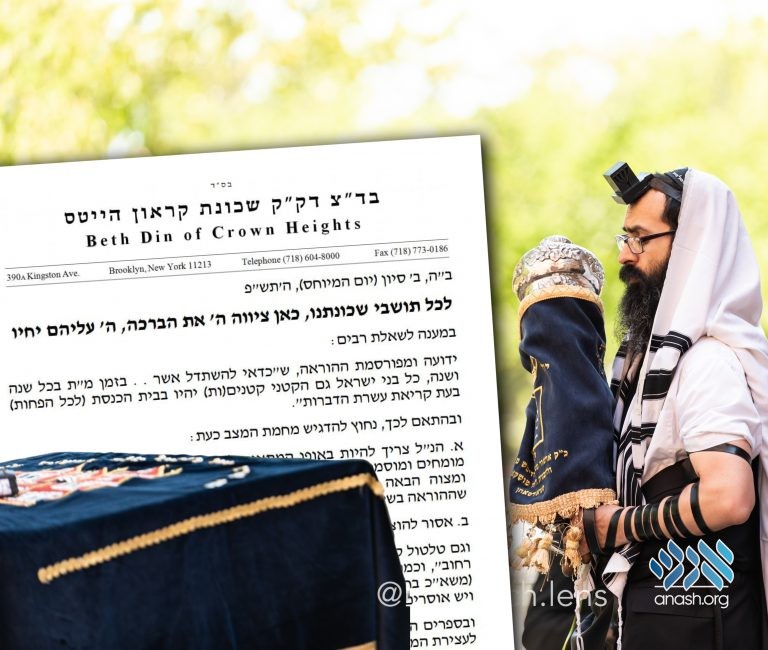 The Beis Din of Crown Heights released a letter saying that bringing a Sefer Torah to the street is forbidden, and giving options how to assure that all could hear Asseres Hadibros on Shavuos.

Harav Avraham Osdoba and Harav Yosef Braun of the Crown Heights Beis Din released a letter on Monday with instructions what to do, and what not to do, in order to make sure that every resident of Crown Heights hears Aseres Hadibros this Shavuos.

“Firstly, everything must be done in accordance with the directives of the health professionals. Reading Aseres Hadibros in a situation which can bring to danger is not a mitzvah, rather an aveira,” they said.

They then laid under what circumstances Halacha permits moving a Sefer Torah, and when halacha forbids it.

“To take a Torah into the street is absolutely forbidden,” they write. “In seforim it says that one should be extra careful about this during the time of a pandemic.”

The Rabbonim suggest that the Sefer Torah be read on a porch or in a private lot, as has been done with the ‘block minyonim’ until now.

The following is the full text of the letter:

To all members of the community שיחיו

In response to numerous inquiries:

It is well known the Rebbe’s directive that everyone, including small children, should attempt to be in shul on the day of Matan Torah, at least during the reading of Aseres Hadibros.

Accordingly, it is important to stress, due to the current situation:

Many Seforim make special mention to be extra cautious in this matter during a plague and how this is a Segulah to stop the plague.
It should be noted that a key emphasis in the Rebbe’s sichos is the reading of the Torah in Shul, in a holy place. Obviously, where this is not possible the Torah must be read out of the Shul premises. However, one should not add to this the reading the Torah in the street which is a severe prohibition.

In the Zechus of all this may we merit to hear Torah Chadosha from Moshiach Tizdkenu now Mamosh.