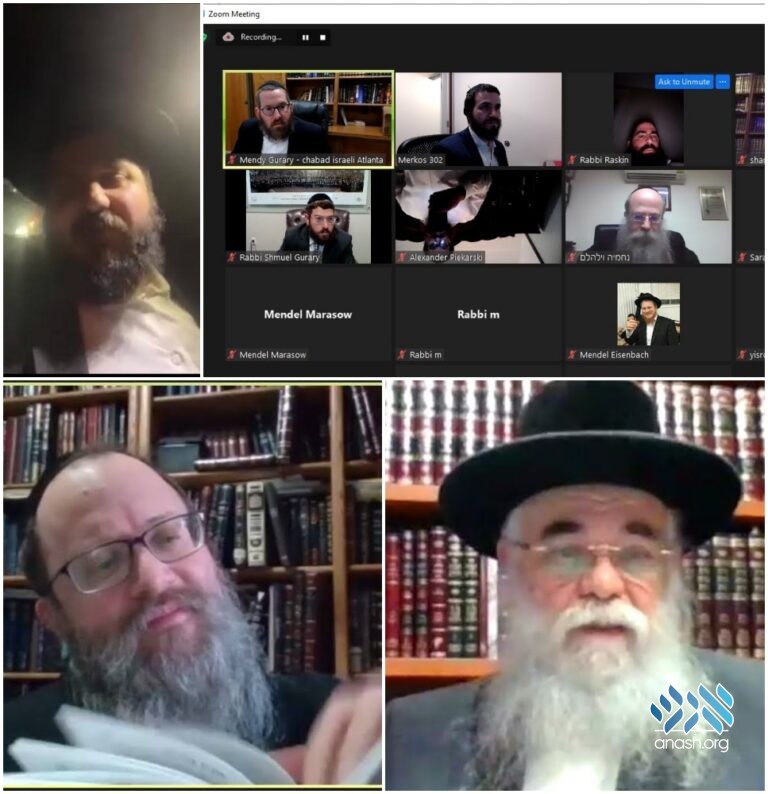 A virtual pre-Pesach gathering Sunday night brought together nearly fifty Shluchim who serve a unique clientele. The growing number of Hebrew speakers migrating worldwide has brought many Shluchim to cater their activities to the local Israelis. Several Shluchim are even dedicated exclusively to Israeli communities. The event was timed in a way that would enable several time zones, including Asia and the US, to be able to join. The group gathered to share tips and discuss practical Halachic issues.

The session, a project of the newly established Hebrew Desk at Merkos 302 in collaboration with Bais Medrash L’Shluchim, was moderated by Rabbi Mendy Gurarie, Shliach in Atlanta, George. The crowd heard from Rabbi Nechemya Willhelm, a veteran Shliach in Bangkok, Thailand, who shared much valuable guidance and advice on running a public seder. Halachic questions, focusing on those that may arise amongst the Israeli and Sefardic communities, were addressed by Rabbi Mordechai Farkash, Rov and Shliach in Bellevue, Washington, and Rabbi Dovid Refoel Banon, Dayan of the Lubavitch and Sefardic Kehilla in Montreal, Canada. The pre-submitted question format quickly dissolved into a more relaxed discussion between the Shluchim and Rabbonim, lasting over two hours.

“The energy and warmth were felt even over Zoom,” commented Rabbi Shimon Binshtock, Director of the Hebrew Desk. “The instant connection felt between the Shluchim is the biggest indication of how necessary an Israeli Desk is, a central organization to bring all of us under one umbrella, to share resources, experiences, and comradery.”

One of the hachlatos of the Kinus HaShluchim 5782, the Hebrew Desk at Merkos 302, has created a network of Shluchim that deal with the Israeli communities outside of Israel. Programs such as CTeen, CKids, and others – both new and old- are being translated into Hebrew and branded for the Israeli crowd living outside of Israel. The desk also coordinates group events and speaking tours to allow many Shluchim to join together on more significant projects.

“The Israeli community is unique in many ways, including language and culture. Your success with your Shlichus will determine the success of this newly established Hebrew Desk,” Rabbi Mendy Kotlarsky, Director of Merkos 302, told the Shluchim who had gathered. “The resources, programs, and joint events are being worked on to cater to the Israeli way of life. We hope this reflects directly into growth for your Chabad House.”

Rabbi Binshtock, who will be leading the Desk, has been working with the Israeli community in Toronto for over ten years. A decade of hands-on experience has brought invaluable insight into the steering of this new initiative. “Many more exciting projects are currently in the works, so stay tuned,” says Binshtock.