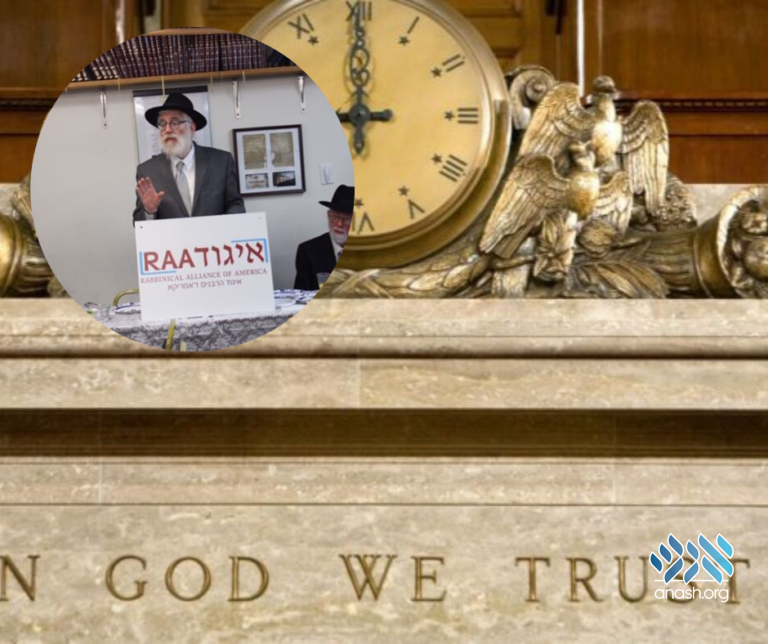 The Rabbinical Alliance of America, under the direction of Rabbi Yehoshua Hecht, are pushing for a Moment of Silence in schools around the country.

In a statement called “In G-D We Trust – A Call for a Moment of Silence in all Public Educational Institutions”, Rabbi Hecht writes:

July 30, 2019 marks the 63rd anniversary of the bipartisan vote of the US Congress (pl 84-140) enacted to officially amend the motto of the United States of America to be “In G-D we trust.” It was signed into law by then President Dwight D. Eisenhour to the applause of Americans of all faiths and creed.

Recently, several States, such as Florida, Kentucky, South Dakota and others have passed legislations requiring that this motto be prominently displayed in all their public schools.

The Rabbinical Alliance of America a National Rabbinic association with more than 950 members serving congregations and communities throughout the USA commend and support this movement for conveying an awareness of the Creator to be part of the educational milieu and environment for all the Nations pupils.

For too long and with disastrous results our public schools have failed our Nations children in the education of ethical and moral behavior that is so vitally needed to curb the out of control violence and mass shootings and other outrages all too often perpetrated by misguided youth.

We call upon all States to mandate a Moment of Silence at the commencement of the day allowing for teachers and students to silently reflect on the Creator and faith in a Higher Being. This will directly help to guide all our citizens to lead a more exemplary life resulting in respect and caring for others; knowing that there is an “Eye that Sees and an Ear that Hears” our deeds and words.

This Moment of Silence will serve all people regardless of faith or creed to reflect on our universal commitment as human beings to conduct ourselves accordingly.

Its time for Americans to support the implementation for a Moment of Silence and thus help secure the welfare of our children and young adults.

Rabbi Yehoshua S. Hecht; presidium chairman of the RAA noted that a Moment of Silence in our school will immediately assist to diminish the violence and hatred so prevalent in society today, and will lead to an increase within society in the peace and well- being of all of our citizens,

We pray that He who makes peace in His heavenly abode will make peace upon us, Amen.