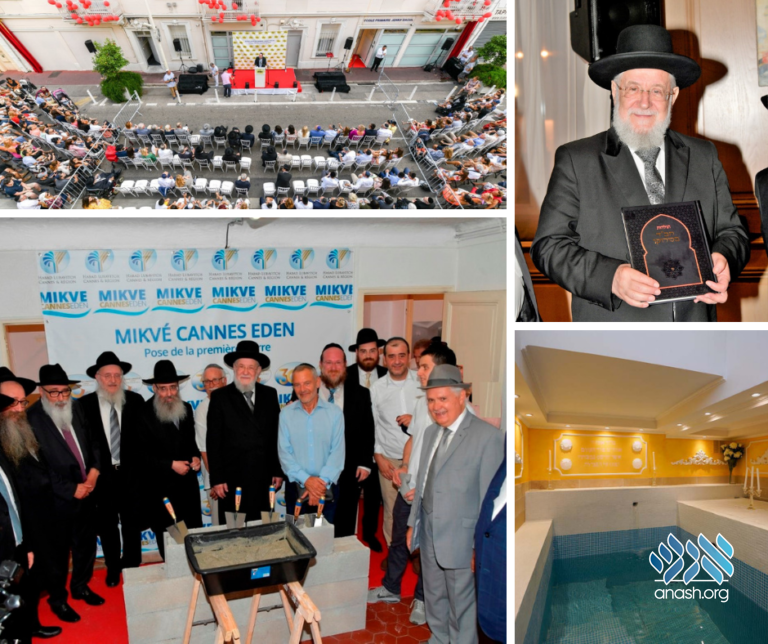 Three major events took place last week in Cannes and its area, with guest of honor Rabbi Yisroel Meir Lau, Chief Rabbi of Tel Aviv and Former Chief Rabbi of Israel, and in the presence of many guest and dignitaries,

Inauguration of the new building of the Jewish School of Cannes

The Jewish School of Cannes welcomes 140 students, from kindergarten to junior high school, and students come from all over the region.

A major project to extend the building was started in 2016, to double the area of the School, which now has 1200 square meter. The work was recently completed.

The inauguration was an opportunity to discover the magnificent premises, as well as the new playground on the roof terrace.

After the speeches of Rabbi Youdi Lewin, Rabbi Mendel Matusof, Mr Petit-Ohayon, and the Mayor of Cannes, Chief Rabbi Lau gave an exciting and emotional speech. As a survivor of the Buchenwald concentration camp, he expressed his emotion at the sight that Jewish education continues to develop in Europe.

“No one will change the past!” he said, “but we have the power, and the duty, to change the future!” He was applauded at length with a standing ovation, and tears could be seen streaming down the eyes of many people. In the assembly was a family whose father suffered with Rav Lau in Buchenwald…

Then came the great moments: unveiling of the sign, followed by a magnificent musical show by the students, then cutting the ribbon, visiting the school, and a hearty buffet.

Groundbreaking of the new Mikvah in Cannes

A second event took place on the same day: the groundbreaking of the new Mikvah at Chabad of Cannes.

Upon arriving at the scene, Chief Rabbi Lau immediately noticed the red carpet installed for the occasion. “I can see that we are in Cannes, the city of the Festival,” he says humorously, “but it is here, in this Mikvah and in this School, that the real glitter shines! It is here that the spiritual truth is found, it is in these places that the future generation is built.”

The Rabbanim and the personalities then proceeded to lay the first stone, blessing the donors who contribute to the creation of this Mikvah.

Inauguration of the Mikvah in Frejus-St Raphael

The next day, took place the inauguration of the Mikvah of Fréjus St Raphael, led by Rabbi Meïr Altabé.

Frejus St Raphael, 45 minutes’ drive from Cannes, is home to a small Jewish community, and building a Mikvah was a difficult challenge. Many efforts were invested, and the result is there: a magnificent Mikvah, which will be useful to both the local community and the many tourists in the summer season.

The entire local Jewish community was present for this historic event, and Rabbi Altabe thanked the Rabbinical Center of Europe and the Mikvah Tahara organisation for their financial support.

Chief Rabbi Lau spoke of the history of this place: 2000 years ago, Frejus was an important Roman city, and it is known that Jews lived there at the time.  “Frejus has been waiting 2000 years for the construction of a Mikvah!” he said.

The Regional Rabbi Mendel Matusof warmly thanked all those who participated in the creation of this Mikvah: “You have brought fresh water into the desert… “.

After cutting the ribbon, the Mezouzots were laid, and the Mikvah’s exceptional beauty was applauded at length.

In occasion of this historical visit, the famous book “Chabad in Morocco”, edited by the Matusof family, was presented to Rabbi Lau.