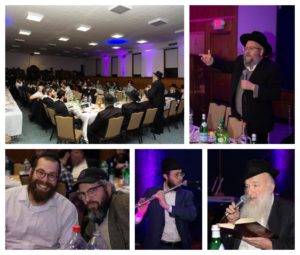 The entire Chabad community in New Haven, Connecticut, was touched this Yud Shvat by Rabbi Reuven Wolf, who flew in from LA for the momentous day.

Ohel Yosef Yitzchak organized a beautiful farbrengen, attended by rabbonim of the local yeshivas, kollel yungerleit and professionals, who gathered to hear Rabbi Wolf’s impassioned message about the world’s preparedness for the geula.

Moshiach is permeating the world with G-dliness, Rabbi Wolf declared, noting positive actions taken by Jews as well as non-Jews. He urged his listeners to take charge, learn about Moshiach and advertise it to others.

In addition to the farbrengen for anash, Rabbi Wolf also addressed the nshei, mesivta and zal, leaving New Haven that much more inspired to make the Rebbe’s vision in Basi Legani a reality.