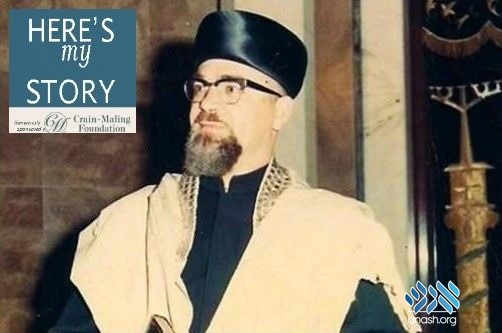 I was born and educated in Jerusalem, becoming ordained the fourth-generation rabbi in my family. With the encouragement of my mentor and teacher, Rabbi Ben-Zion Meir Chai Uziel, the chief rabbi of Israel, I went to serve initially as rabbi in Lima, Peru. After more than eight years there, I moved on to serve the Sephardic community of Seattle, Washington, arriving in that city at the same time as the Chabad chasid, Rabbi Sholom Rivkin, who served the Ashkenazic community. We became very friendly and studied Torah together on a daily basis.

But I had no contact with the Rebbe himself until 1961, when a movement began in the United States to ban kosher slaughter on the grounds of animal cruelty and a law to that effect was proposed in the state of Washington. Of course, this would pose a huge problem for Jewish community, so when this law came up for a hearing in the state legislature, I joined two other rabbis in addressing the lawmakers. My colleagues spoke very diplomatically, explaining that kosher slaughter is, in fact, a great deal kinder to animals than other methods. But when my turn came, I was much more blunt. I said, “My native language is Hebrew, however I will ask you just one question in the language that I am still learning to speak: You talk about cruelty to animals, cows and sheep, but where were all of you when six million Jews were butchered, among them a million children who were burned and went up to heaven in the crematoria like sacrifices. Where were you then? Why didn’t you speak about cruelty then?”

The members of the legislature gave me a standing ovation, and the next day newspapers quoted my words. The proposed law was cancelled, and I received many letters of support from American rabbis. Among them was also a letter with blessing from the Lubavitcher Rebbe; subsequently, I received an invitation to visit the Rebbe next time I was in New York.

I arrived in New York close to the observance of the yahrzeit of the Previous Rebbe, and it was therefore very difficult to get an appointment, but I was advised to send a telegram to let the Rebbe know that I am here. That’s what I did, and a short while later I got a call that I should come meet him right away.

The meeting lasted about forty-five minutes. We spoke mostly in Hebrew on a variety of topics in Jewish law, but mainly about Jewish education and the state of Judaism in North and South America, where intermarriage and assimilation were rampant.

During our conversation, the Rebbe said to me, “You know that a Lubavitcher chasid doesn’t travel without a Chumash, Tehillim and Tanya. How about you? Have you brought a Chumash?”

“Yes,” I answered, “I have it in my head. I know the entire Five Books of Moses by heart.”

“And what about Tehillim?”

“And what about Tanya?” the Rebbe continued.

“I didn’t bring a Tanya with me,” I had to admit as I was not well acquainted with this seminal work of the Chabad movement.

At that, the Rebbe stood up, walked over to a cabinet, opened a drawer and took out a Tanya. He handed me the book and said, “This is for your activities in Seattle.” (I still have this precious gift.)

Not long after my meeting with the Rebbe, I was offered a rabbinic position in Mexico City. Fully prepared to accept this position, I signed a contract with the Jews of the Monte Sinai congregation on the condition that they procure a visa for me and my family. In those days, visas for Israeli passport holders were difficult to obtain, but they promised to do so, and we set a period of two months for the arrangements to be made.

Two months came and went, but the visas did not materialize.

Meanwhile, I was offered a rabbinic position with the Congregation Shearith Israel in Manhattan. This is a very old and distinguished community, whose shul – better known as “the Spanish and Portuguese synagogue” – is a recognized heritage site.

I came to New York to meet with the senior community members and they asked me to sign a contract. When the Jews in Mexico City got wind of this, they called me, asking: “What are you doing in New York? Why aren’t you coming to us?”

“But how can I come to you without a visa?” I responded.

“Don’t worry,” they said, “we will send you the visa. Don’t talk to any other congregations.”

I didn’t know what to do. Should I accept the offer from New York, or should I wait for Mexico City?

Since I was in New York, I decided to visit the Rebbe and seek his counsel. I was sure he would help me determine what was the best thing for me to do.

The Rebbe received me most warmly. I felt that he really cared about me and my dilemma – it was like I was talking with my father. When I explained the situation, he told me, “Rabbi Shalem, your place is in Mexico City.”

He explained that there are places where the people aren’t really looking for a teacher to learn from or a spiritual guide, but for a puppet figure with the title of “rabbi.” Of course, such individuals are difficult to influence. But the Jews of Mexico City, he said, are crying out for a real spiritual leader.

“There you can accomplish great things!” he said. “There are so many areas where you can be active – they need help with education, kosher food, and stemming intermarriage and assimilation.”

And so, with his blessing, I decided to take the position in Mexico City, and went on to serve there for over fourteen years. During those years, I was in frequent contact with the Rebbe regarding all matters involving the community.

And, as he foresaw, I was able to further Judaism in Mexico in many ways. For one, I founded a yeshivah, which initially was met with quite a bit of opposition. People said, “Who needs a yeshivah? Why are we going backwards in time instead of progressing?”

In a subsequent audience, I mentioned to the Rebbe some of the obstacles I was facing. I shall never forget his response. “When the moon is full,” he said, “the foxes howl at it. But does that cause the moon to stop shining its light?”

He meant, of course, that there is no rabbi who doesn’t face opposition, and there will always be someone who is trying to thwart the rabbi’s efforts, but it’s clear that he must go on unfazed for the good of his community.

I was enormously grateful for his caring and encouragement, as I was for all of his wise guidance over the years.

After the passing in 1953 of my mentor and teacher, Rabbi Uziel, in whom I had confided everything, I felt like an orphan, having no one to lean on until I met the Rebbe. He accepted me with open arms, and I found in him the love and support that I was missing. Although I was in contact with many rabbis, there was no person like the Rebbe in whose light I could always feel such warmth.

Rabbi Avraham Shalem (1928-2014) led congregations in Israel, Peru, the United States and Mexico, where he translated the Shulchan Aruch into Spanish and wrote many other books in Hebrew and Spanish. He was interviewed in his home in Jerusalem in May of 2012.