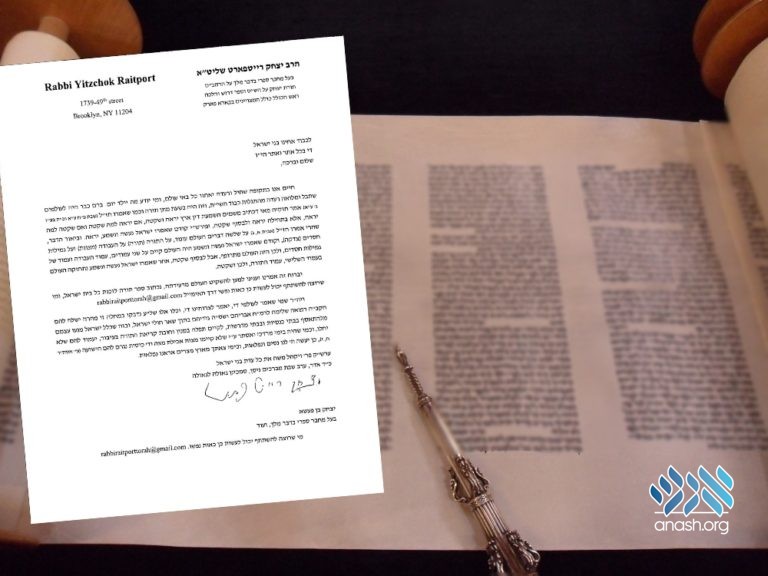 Rabbi Yitzchok Raitport, Rosh Kollel and supporter of Crown Heights Schools, is writing a new Sefer Torah in the merit of Klal Yisrael.

Rosh Kollel Rabbi Yitzchok Raitport, mechaber seforim and supporter of Oholei Torah and Bais Rivka, announced the initiation of a new Sefer Torah, written in the merit of Klal Yisrael.

With the current precarious situation, the world is in a tremendous state of uncertainty. “But the world has already experienced trembling,” Rabbi Raitport pointed out in his letter concerning the project – “at Mattan Torah when Hashem’s glory was revealed.”

Up until that point, the world, which currently stands on three pillars, was only resting on two – avoda and gemilas chassadim. When the Jews accepted the Torah, the world received it’s third supportive pillar and was was now placed on a firm foundation.

“In this spirit,” Rabbi Raitport continued, “a Torah is being written in the merit of Klal Yisrael, to help settle the world from its trembling.”

He also compared the current situation of Jews being forced to temporarily suspend certain obligations such as davening with a minyan, to the times of Mordechai and Esther. Back then, certain mitzvos of Pesach were not fulfilled in order that the Jews be able to continue fulfilling them for eternity, and this brought about salvation.

“So too, may Hashem perform wonders for us,” Rabbi Raitport concludes, as Hashem promised to do in the future as He did at Yetzias Mitzrayim.

To participate in the writing of this Sefer Torah, please email rabbiraitporttorah@gmail.com.