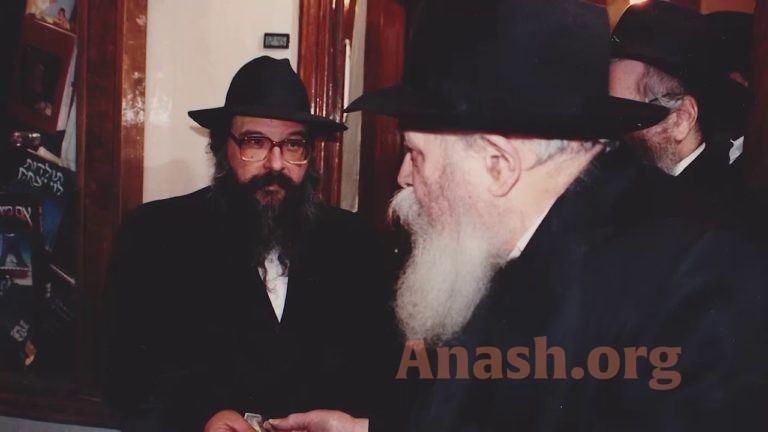 During a Yechidus for his birthday in 5719/1959, Rabbi Avraham Levitansky A”H was at loss why the Rebbe kept repeating the same sentence over and over again. A short while later he fully understood why.

Summer 5719 (1959) was fast approaching. I was going to drive to Chicago from New York, together with my parents and brother, peace be with them. Before leaving, I merited to meet the Rebbe in yechidus, private audience, to receive a blessing for my birthday (21 Av) among other things.

The Rebbe spoke for about fifteen to twenty seconds. Suddenly he said: “Der Eybershter zoll helfen es zoll zein a gezunter zummer. Hashem should help that it be a healthy summer.”

The Rebbe continued to speak about other matters. A minute later, he repeated: “Der Eybershter es zein a .” Hashem should help that it be a healthy summer.”

This happened a third time: the Rebbe “interrupted” the conversation with the above words. Afterwards, he continued to speak.

Suddenly he intoned: “ Der Eybershter zein a . Hashem should help that it will be a healthy summer.”

He then gave me four dollars for the shlichus mitzvah for my parents, my brother, and myself. (Sending off a “messenger” with money for charity helps to ensure a safe trip.)

We got into the car and drove off. On our way we stopped in Cleveland, where my father learned that his brothers weren’t well. We then continued onto Chicago.

Suddenly a storm burst. Torrents of rain flooded over the highways, pounding our vehicle and hindering visibility.

My father was normally an experienced driver. A traveling salesman, he drove 15-20,000 miles a year without ever having an accident. But here – wham! The car skidded all over the turnpike, hurled into a ditch, then skidded another 150 feet. It slammed against a boulder, flew up in the air like a helicopter, and with a thud hit the pavement on the turnpike facing the wrong direction.

Then the rain stopped. We crawled out of the car, which was totally smashed. Miracle of miracles! All four of us survived without a scratch.

I then understood the Rebbe’s words in the yechidus – four times he repeated himself for the four of us in the car, with his conclusion – it will be a healthy summer.

When we finally arrived in Chicago, I wrote to the Rebbe about this incident, and also wrote about the health of my uncles, who were feeling better.

Below is a translation of the Rebbe’s response.

I was happy to receive your letter that the trip went through peacefully, notwithstanding the incident. Hashem should help, that from now on we should not have to resort to such types of miracles, and we should utilize the brachos of Hashem in apparent and revealed good.

Thank you for the good news that your uncles, shyechiyeh [may they be well], are already back home and feel better. May it be the will of Hashem that they should have a speedy and complete recovery.

At an auspicious time, we will mention Mr. Moshe ben Chaika at the holy resting place of my father-in-law the [Previous] Rebbe [Yosef Yitzchak Schneersohn], according to the content that you have written.

And surely you will explain to him that a Yid has to act according to the ways shown by our Torah, the Torah of Life, to have set times to learn Torah and to keep the mitzvoth behidur [beyond the letter of the Law], which is a conduit and a vessel, to the blessings of Hashem, in that which we need.

With a bracha for good news in all that was mentioned,

And with regards to your parents, sheyichiyu, and success in your work in matters of Yiddishkeit.

In the name of the Rebbe,
Signed by the secretary