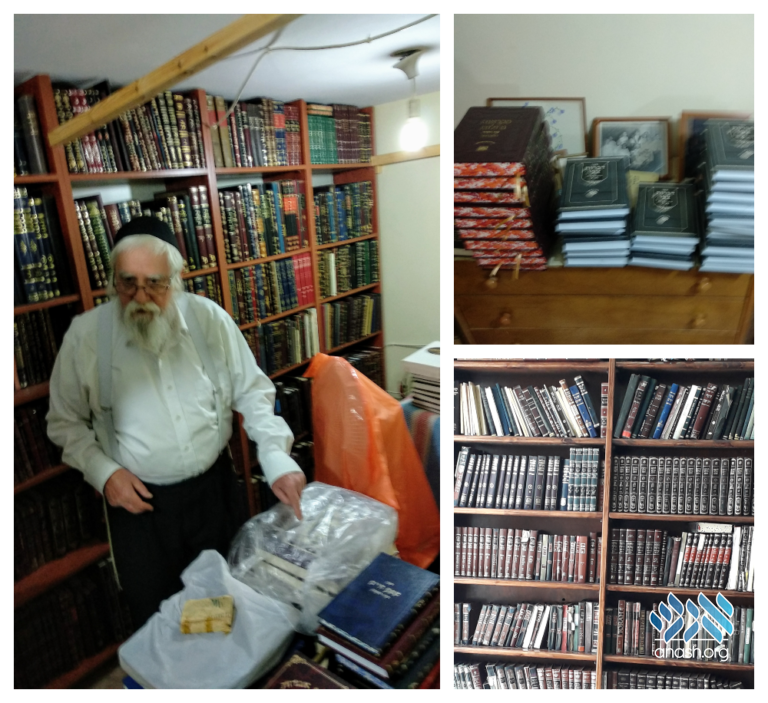 Rabbi Schneur Zalman Gafne recently moved to Tzfas, bringing his library of rare seforim with him. Now, it is set to become public.

Tzfas, Eretz Yisrael – Several years ago, the mashpia, Rabbi Schneur Zalman Gafne, moved to Tsfas and brought most of his collection of rare seforim with him, as he began teaching in the Tzemach Tzedek Shul, under the auspices of Chabad Tsfas in the Old City. Rabbi Gafne has thousands of talmidim from his years in Kfar Chabad, where he ran a yeshiva that took beginners and more advanced students alike and molded them into the zeides, community leaders and heads of Anash families that they are today.

Hundreds of previous students maintain a close relationship with Rabbi Gafne, seeking his advice, wisdom and insight in their daily lives. Many turn to him for learning and he gives many classes, at the Tzemach Tzedek Shul, at Yeshivas Temimei Derech and more. The library will facilitate direct and continuous connection with the generations of students who he has built up and mentored.

Rabbi Gafne has such rare seforim that twenty of them were sent to the Rebbe’s Library in New York. The collection needs to be introduced to the public. This rare library is set to be housed in the Tzemach Tzedek Kollel. Many of the seforim are rare and need to be digitized to preserve them, something that will also make these seforim available to learners worldwide. “Rabbi Gafne is a great boki (expert) in Chassidus, Halacha and in-depth Nigleh and these seforim reflect this. This will serve the entire Torah world, just as the Tzemach Tzedek Shul in Tsfas hosts a day kollel and night learning for all types of chassidim and others. We can now, thanks to Rabbi Gafne, spread Torah throughout the world,” said Rabbi Gavriel Marzel, director of the Chabad of Tsfat in the Old City and the Tzemach Tzedek Shul.

The library will also allow him to teach and inspire a new generation, with its set to be released online video abilities, social media and live classes/talks. Aside from digitization, the library is also set to allow new generations to sit and learn seforim which are generally unavailable almost anywhere else, in all aspects of Torah. In short, the entire project is not only of special benefit to Rabbi Gafne’s thousands of talmidim and future talmidim, but to the Torah world at large.

To take part please go to www.chabadtsfat.com/establishment-of-gafne-library or email gafnelibrary@gmail.com.