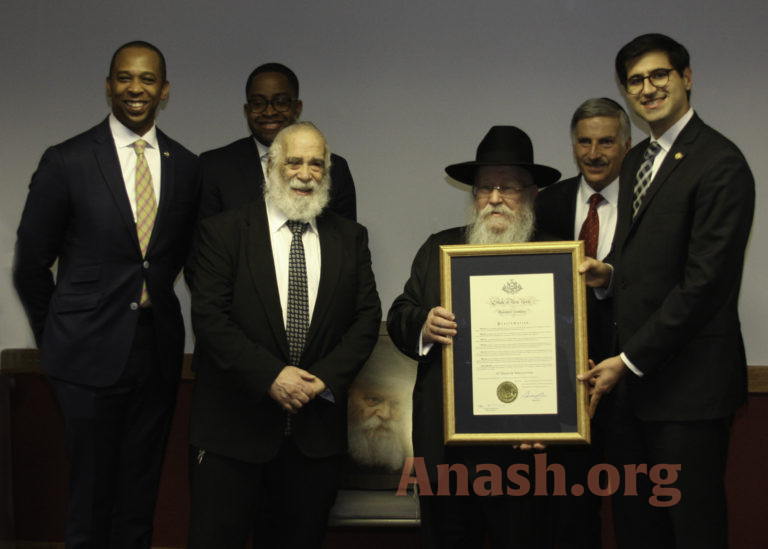 A special celebration was held in the New York State Capitol in honor of the Rebbe’s 117th birthday led by Rabbi Shmuel Butman.

Rabbi Shmuel M. Butman, director of Lubavitch Youth Organization, offered words of welcome to the members of the New York State Legislature, their associates, and their staff.

Rabbi Butman noted that when the Rebbe spoke about education, he spoke of the education of all children, regardless of race, religion, color or creed. The Rebbe emphasized, that he wants all children to know that there is “an eye that sees and an ear that hears, and that the world is not a jungle.”

Rabbi Butman stressed that the Rebbe said that we live in the last generation of exile and the first generation of redemption and we can bring the Redemption even closer through more deeds of “Goodness and kindness.”

The proclamation of Governor Andrew Cuomo was read by his special representative to the Jewish Community Michael Snow. Michael Snow shared how the Rebbe plays a very important role in his personal life. Assemblyman Walter Mosley and Senator Zellnor Myrie who represent Crown Heights in the Assembly and Senate, both spoke with enthusiasm about their warm relationship with the Jewish Community of Crown Heights, which is a model of  peace and coexistence.

Rabbi Yisroel Rubin, the Shliach (emissary) of the Rebbe in Albany and vicinity, overseeing many Chabad Houses, spoke about the scope of the Rebbe’s activities all over the world.

During his opening of the New York State Assembly Rabbi Butman thanked the members for the resolution they passed proclaiming “117 Days of Education” in honor of the Rebbe’s 117th birthday.

Rabbi Butman recalled with reverence that before he opened the United States Senate in Washington in the year 1991, the Rebbe told him “Take a Pushka (charity box) with you, and let everyone see what you are doing, and let them know, on what money should be spent.” In accordance to this directive, Rabbi Butman brought a Pushka with him to Albany, and during his prayer, he placed a dollar bill in the Pushka. He also asked the legislators to join in putting a dollar into the Pushka. “This is not a fund-raising campaign, for if it were, we would ask you for much more than one dollar. This is part of the Rebbe’s campaign to do even a mere act of goodness and kindness” Rabbi Butman said.

It was most interesting to see how the members of the New York State Assembly lined up after the prayer to offer their own dollar in the Charity box as an act of goodness and kindness.

Rabbi Butman concluded the event by distributing hand-baked Shmurah Matzah to the legislators.