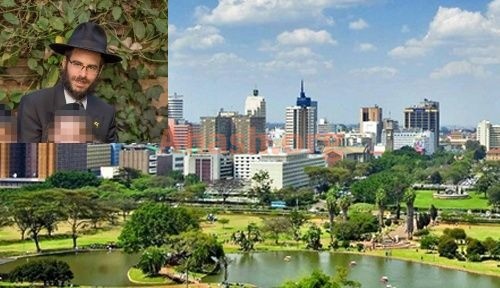 A gang of burglars broke into a Chabad home in Nairobi, Kenya on Chol Hamoed, assaulted the Rabbi and his family and caused tens of thousands of dollars in damage.

The 5 burglars broke into the shul and family residence during the predawn hours on Wednesday and beat Rabbi Shmuel Notik and his wife Chaya. They then proceeded to steal thousands of dollars worth of property.

Police are working on the premise that local guards were working together with the robbers.

Rabbi Shmuel Notik’s brother, Moshe Notik, said his brother had suffered light injuries during the attack, but that his sister-in-law, Chaya, was listed in moderate condition and required surgery after suffering head injuries.

During the break-in, the robbers encountered two yeshiva students who were on hand to help run programs and bound their arms and legs and gagged their mouths with a cloth. Bechasdei Hashem, the couple’s three children were unharmed.

Rabbi Notik first tried to call the police, but the burglars began beating him and threatened that if they did not cooperate, they would harm him and his family.

They then continued into the bedroom and hit his sleeping wife with sticks. They threatened to kill her while making anti-Semitic references.

Moshe Notik said that his brother was then tied up, and locked in a bathroom together with his wife and three children. They waited there until police arrived.

The robbers made off with thousands of dollars worth of computers, cell phones, Tefillin, jewelry, money, a Menorah, candle holders, Kiddush cups, food, and kitchen equipment. The couple’s passports were also stolen.

“They are shocked,” said Moshe. “As far as they can tell, the burglary was motivated by anti-Semitism.”

The Israel Foreign Ministry and the Consul General in Kenya have been apprised and are reportedly working to assist the family and the investigation.

This is not the first time Rabbi Notik has been the victim of a robbery. In 2014, shortly after moving to Kenya, he was robbed at knife point while on his way to shul on a Friday night.

He did not have any valuables on him to give the assailants, so he handed over his siddur and a lapel pin.