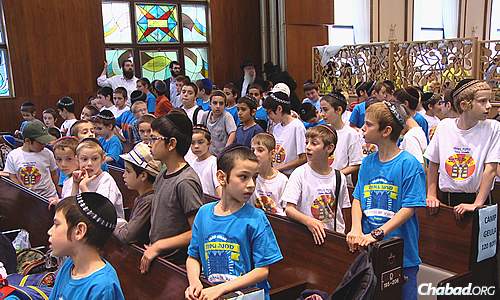 Campers in Montreal gathered recently at Shomrim Laboker synagogue for a rally to support the people of Israel. Chabad.org photo

A new piece of legislation presented on Thursday in the Quebec National Assembly seeks to enshrine secularism by banning all religious garb from teachers, judges, lawyers and others serving in the public sector.

The bill, which is being advanced by the majority Coalition Avenir Québec party and has the support of most Quebecers, would prohibit the distinctive religious garments worn by Jews, Christians, Muslim Sikhs.

But others greeted the proposed legislation with dismay, and Canadian Prime Minister Justin Trudeau was quoted as saying that “it is unthinkable for me to legitimize, in a free society, discrimination against citizens based on their religion.”

To soften the blow, the law has a “grandfather clause” that allows those already filling public positions to continue wearing religious garments, but those who seek to be appointed to these jobs in the future would have to abide by the restrictive law.

Jews who live in Quebec, such as in Montreal, have expressed concern about the effects of this law

This isn’t the first time that frum Jews have had to contend with laws and regulations against head coverings getting in the way of , and the issue is discussed by a number of poskim.

In Shaalos U’teshuvos Maharam (Harav Mordechai) Brisk (1866-1944) of Tășnad, now in Romania, there is a discussion (Orach Chaim, siman 8) regarding a job opportunity that would require working without a head covering. Maharam Brisk cites the Taz who says that although kisui harosh was originally in the category of midas chassidus, the non-Jews have now turned gilui harosh into a “chok” and to abide by it would therefore be a violation of u’v’chukoseihem lo seileichu.

While there are a number of views on what to do practically when faced with such a situation, one should turn to a competent, chassidisher rov for a decisive ruling.