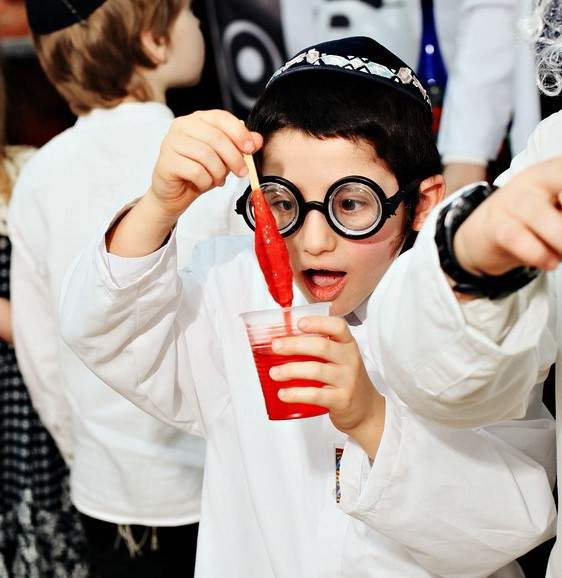 Continuing their annual Purim theme tradition, the Shluchim in Sumy Ukraine Rabbi Yechiel S. and Rochi Levitansky transformed their shul building this year for “Purim in the Laboratory”. In a festive atmosphere, 150 men, women and children gathered together to fulfill the four mitzvos of Purim.

Upon entering the Shul building, the guests were greeted by the shluchim’s children, who helped guide them in placing the Matonos L’evyonim into scientific coin funnels. After receiving their badge, goggles and gloves the guests settled in for the seudah. Along the stairs, professor mannequins contributed to the laboratory atmosphere. The incredible scenery was designed by the students of the “Or Avner” after-school program.

The program began with Mishloach Manos in chemical bags, labeled with caution stickers, cautioning all participants to complete the four mitzvos of Purim. The tables were set with various experiments connected to Purim, salad dressing in syringes to ‘shtech Haman’, Challah shaped as atoms, and molecules connected by toothpicks. The highlight was a dessert centerpiece of a smoking chocolate cake volcano on every table!

The entertainer, dressed as a professor, explained how Purim is connected to the theme of ‘natural occurrences’ and realizing that nature and science is actually miracles from Hashem. He then introduced the “Chief Professor” Rabbi Yechiel S. Levitansky to read the Purim formula – Megillas Esther!

The program included Interactive games, a comedy skit by the Kolel Torah, and a science show that wowed even the adults. As usual the highlight was the song and dance performance by the Ohr Avner kindergarten and of course the famous ‘Hop Cossak’ dance by the shluchim kinderlach.

The community members were thrilled to have partaken in such an exciting event.