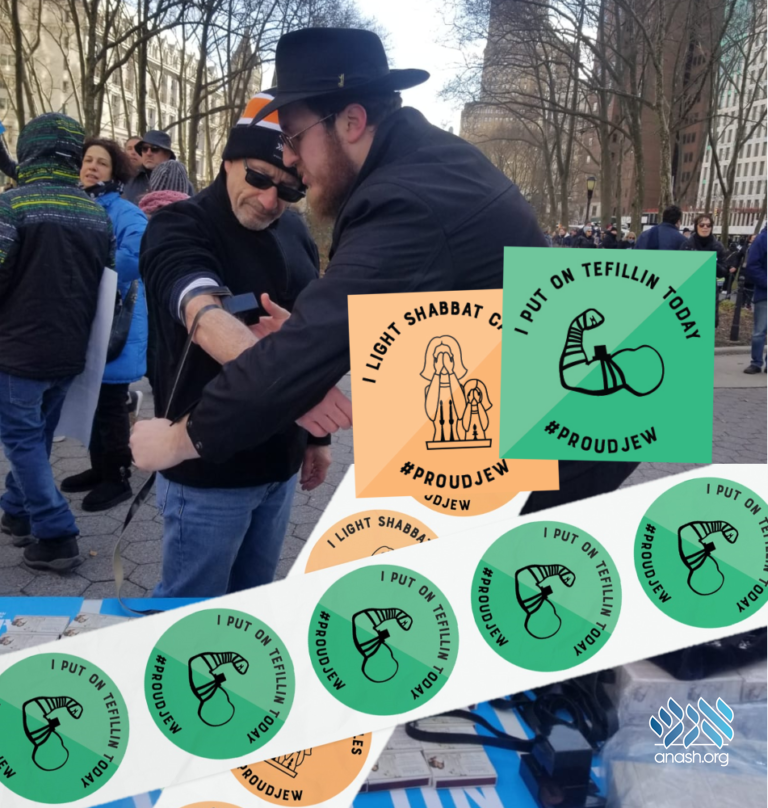 Inspired by the “I voted” stickers, “I did a Mitzvah” stickers send a message of pride in being Jewish and performing a Mitzvah.

In honor of the Lubavitcher Rebbe’s 70 years of leadership, a new initiative to promote Jewish Pride is launching on Yud Shevat.

#ProudJew stickers are the new way to demonstrate #JewishPride on the streets of America. Inspired by the “I voted” stickers with their inherent patriotism, these stickers bring to life the #JewishPride one has in being Jewish and doing a Mitzvah.

The men’s version is a green sticker that proudly proclaims, “I put on Tefillin today” along with a muscular arm wearing Tefillin. The sticker was carefully designed to carry the dual message that Tefillin are our spiritual protection and the spiritual strength of the Jewish nation.

This initiative is the independent work of Rachel Notik, Rivka Korf and Moishy Korf who collaborated to make this a reality. The project came to life after the “No Fear. No Hate” march in protest of the rise of anti-semitism in America. While marching across the Brooklyn bridge, Rachel engaged in conversation with Alan, a reform Jew from New York. As the march proceeded into the park where speakers would present, Rachel noted the many Lubavitchers asking men to don Tefillin. She asked Alan if he would don Tefillin and he initially refused. However, within minutes he was rolling up his sleeve and saying the Brocha. As they proceeded into the park, Alan was repeatedly approached by Bochurim and men, asking him to put on Tefillin. It was at that moment that the idea came to mind.

“I thought to myself, we need to have a proud way to indicate that they put on Tefillin”, recalls Rachel. “So that people will know that they are encountering a Jew who lay Tefillin today.” She reached out to Moishy and Rivka Korf of Rivka Korf Studio with the idea, and from there it took off.

“I love the idea of proudly showing off our Jewish Pride and commitment”, says Moishy. “It’s like the ‘I voted’ stickers. More than just sending a message of the action done, it proclaims the pride behind it”.

The first production of stickers are available on Wednesday, 10 Shevat in Crown Heights. In order to cover costs of production, there is a nominal fee for larger orders. Please contact info@proudjew.org or @1proudjew on Instagram to arrange an order and pickup.