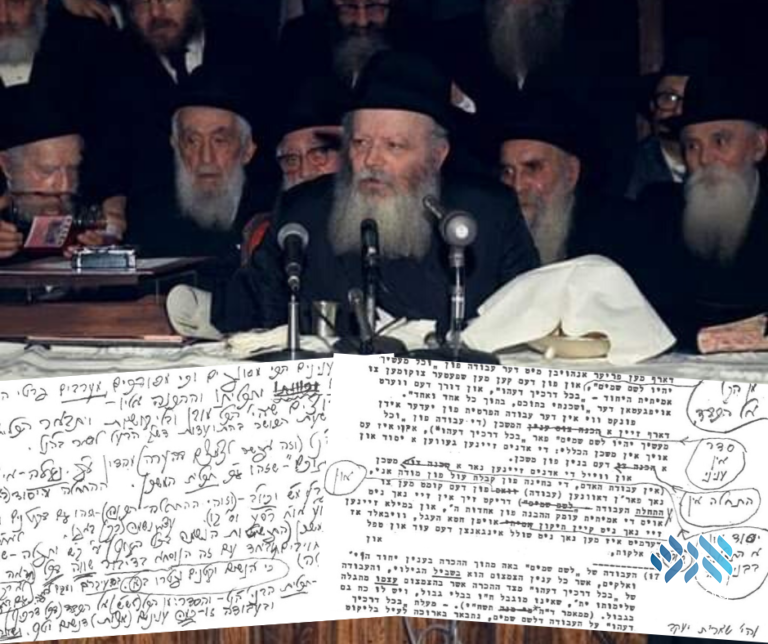 Project Likkutei Sichos released previously unpublished edits from the Rebbe edits on a Sicha, shedding light on his involvement in all stages of preparing a Sicha for publication.

Project Likkutei Sichos released today – for the first time ever- a newly discovered cache of documents, shedding light on the Rebbe’s involvement in the preparation of a Sicha for publication.

As thousands study the Sichos of Parshas Teruma in Likkutei Sichos Chelek Yud Alef with the program of Project Likkutei Sichos, this previously unpublished document transforms the experience of learning this Sicha.

The first sicha for Parshas Teruma (p. 109 – 115) discusses the difference between Terumas Ha’adanim (the half shekel given for the sockets of the mishkan) and Terumas Hamishkan (the general contributions towards the building of the mishkan).

In the winter of 5723 the team of chassidim who would prepare drafts of Sichos for the Rebbe to edit (known as Vaad L’hafotzas Sichos) encountered some questions while preparing the Sicha to be published for Shabbos Parshas Vayakhel (later published in Likkutei Sichos Chelek Gimmel p. 930-933). The content of the Sicha seemed to contradict what the Rebbe had explained in previous sichos, and they presented these questions to the Rebbe.

The Rebbe answered their questions and added that “in the appropriate time we will discuss this at the Farbrengen on Shabbos.” That Shabbos, Parshas Vayakhel 5723, the Rebbe addressed their questions, answering them all by introducing an innovative approach to the topic which became the basis of this sicha which was edited by the Rebbe ten years later and published in Likkutei Sichos Chelek Yud Alef.

While learning the sicha this week, many of the participants discussed and debated this very topic, and the different layers of explanation found in this Sicha, and are now excited to discover that the very purpose of this Sicha is to introduce this innovative approach to the topic.

“Seeing this Ksav Yad Kodesh for the first time was truly awesome in every sense of the word”, said Rabbi Moshe Goldman, a member of the team working on this project. “It is amazing to see the thread of history in this Sicha, and how much time and energy the Rebbe poured into teaching us his Torah”.

Special thanks go to the anonymous individual who shared these priceless documents with us so that we can share them with you, וזכות הרבים תלוי בו.

In the four weeks since its inception, Project Likkutei Sichos has moved the Lubavitch community – and beyond – in a rush of excitement, bringing together thousands of Yidden who are learning through Likkutei Sichos on a weekly basis. The website www.ProjectLikkuteiSichos.org offers a plethora of audio and video shiurim on multiple levels, as well as many text based resources, all in multiple languages. Join the movement today – sign up at www.projectlikkuteisichos.org