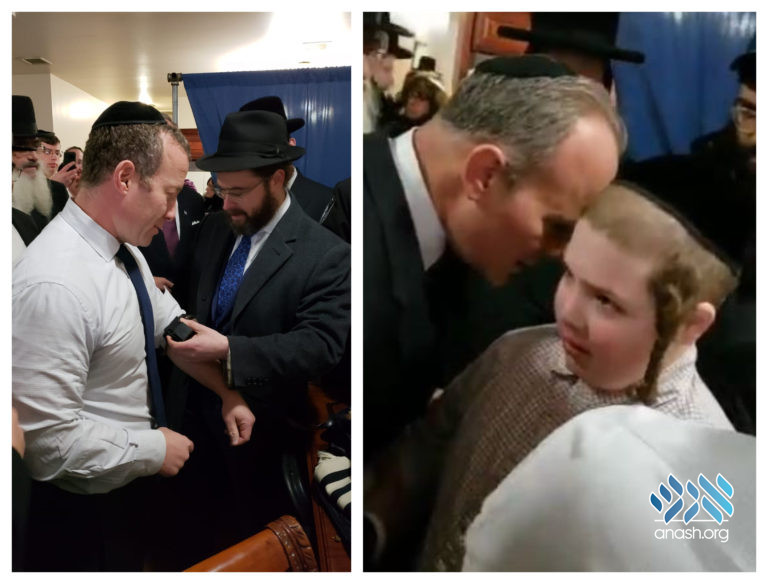 Elan Carr, the State Department’s Special Envoy for Monitoring and Combating anti-Semitism, visited the Ferencz family on behalf of President Trump. He was accompanied by Shliach Moshe Shapiro who took the chance to put tefillin on him.

Elan Carr, the State Department’s Special Envoy for Monitoring and Combating anti-Semitism, visited the Ferencz family on behalf of President Trump and conveyed his condolences.

The Ferencz family also received a flag flown over the US Capitol. The flag had been flown in honor of their mother, by request of Congressman Josh Gottheimer who also joined the visit.

Accompanying Mr. Carr and Congressman Gottheimer was Rabbi Moshe Shapiro, shliach to Hoboken and Jersey City, who has been very involved with helping the community recover from the recent tragedies.

Rabbi Shapiro took the opportunity to put tefillin on Congressman Gottheimer who spent a few minutes saying Shema and davening in the shiva house.

Rabbi Shapiro told Anash.org that it wasn’t easy to get the Congressman to put on tefillin. “The only way I got the Congressman to agree, was by telling him that just an hour ago I put tefillin on with Mr. Carr. How can you say no?” I asked him, “The Congressman looked at me and said that if Mr. Carr will wait for me I will agree to do it now. Hearing that, Mr. Carr exclaimed ‘how can I not wait for the great mitzva of tefillin?’ Especially in a shiva home!’ Finally, Congressman Gottheimer agreed.”